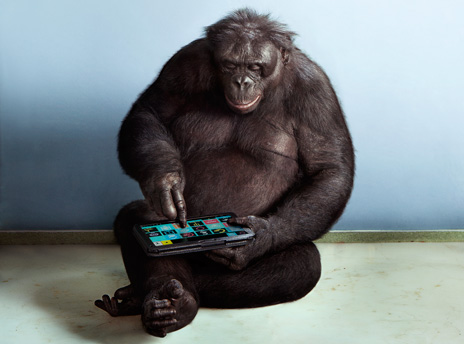 Have you ever watched a toddler play with an iPhone?

Most likely, the child was completely captivated and surprisingly adept at manipulating the tiny icons. Two-year-old Teco is no different. Sitting with his Motorola Xoom tablet, he’s rapt, his dark eyes fixed on the images, fingers pecking away at the touch screen. He can’t speak, but with the aid of the tablet app I created for him, he’s building a vocabulary that will likely total several thousand words. What’s more, he’ll be able to string those words together into simple sentences and ask questions, tell jokes, and carry on conversations.

Such talents wouldn’t seem exceptional in a human child, but Teco is an ape—a bonobo, to be precise. To the uninitiated, bonobos look very much like chimpanzees, but they are in fact a separate species with distinct physical and behavioral traits. More collaborative and sociable than their chimp cousins, bonobos also seem to be more adept at learning human language. And they are endangered, found in the wild only in the Democratic Republic of the Congo. Recent estimates put the wild bonobo population at between 10 000 and 50 000. Fewer than 150 live in captivity. Along with the chimpanzee, they are our species’ closest relatives.