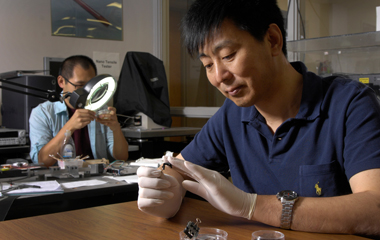 The idea of combing electronics with our clothing has been around for a while, but, so far, it has produced mixed results. Nanotechnology has often been mentioned as an ingredient to add to the electronics-textile mix, to help push concept beyond mere novelty.

One way to bring nanotechnology into electronic textiles is to make the textile itself into a big battery for powering our personal electronics. Two years ago, researchers at the University of California Berkeley pursued this line of research. Their approach was to weave nanowires into the textile and to rely on the piezoelectric properties of the nanowires to develop power. While I have not followed up to see where that research ended up, it did seem a bit complicated—weaving nanowires into a textile sounded like a daunting task.