Autonomous Robots in the Fog of War 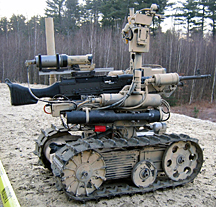 Two small planes fly low over a village, methodically scanning the streets below. Within minutes, they spot their target near the edge of town. With no way to navigate through the streets, they radio for help. Soon after, a metallic blue SUV begins moving cautiously but purposefully along the dirt roads leading to town, seeking out the target’s GPS coordinates. Meanwhile, the planes continue to circle overhead, gathering updated information about the target and its surroundings. In less than half an hour after the planes take to the sky, the SUV has zeroed in on its quarry. Mission accomplished.

Last fall, my research team fielded these vehicles at Fort Benning, Ga., during the U.S. Army’s Robotics Rodeo. That’s right, the two quarter-scale Piper Cub aircraft and the Porsche Cayenne operated without any humans at the controls. Instead, each robot had an onboard computer running collaborative software that transformed the three machines into an autonomous, interoperable system. [read more..]