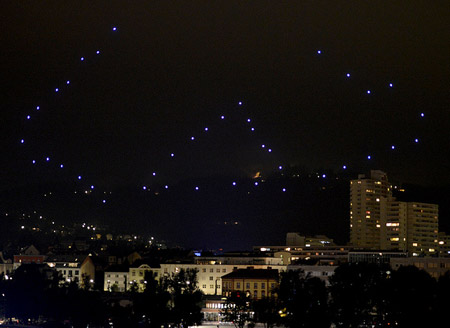 We were pretty impressed with KMel’s quadrotor performance at Cannes back in June, and the idea of using swarms of quadrotors to create light shows seems to be catching on. At the voestalpine Klangwolke Cloud in the Net festival in Austria, a swarm of 50 quadrotors teamed up to put on a giant animated show in the night sky.

The performance, programmed by Ars Electronica Futurelab and Ascending Technologies, featured a world record fifty AscTec Hummingbird quadrotors in a synchronized and choreographed, LED-lit dance. The 500 gram robots were carrying lights and had special radio receivers and slightly modified firmware, but otherwise, they apparently just relied on GPS for positional control. You can’t get the same performance that you can get out of a Vicon system, but on the upside, you don’t need a Vicon system, which (in addition to being kinda expensive) only really works in a relatively small and well-defined environment. [read more..]