How Do You Assemble a Brain? Randomly 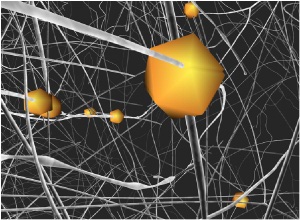 It is a puzzlement: How do you assemble and wire an information processing device as complex as the mammalian brain? There are roughly 86 billion neurons in a human brain, forming about a quadrillion synapses. A rat’s brain is just one thousandth that size, but still pretty complex, with 56 million neurons and 500 billion synapses.

How does the brain know to put a nest basket cell here, a small basket cell over there, a large basket cell in the middle, a Martinotti cell on the left and a bi-tufted cell on the right, all wired up to pyramidal cells? There has to be a plan, doesn’t there? I mean, the body doesn’t just throw its inventory of brain cells out there like a bunch of pick-up sticks, to fall where they may.

As it turns out, that may be almost exactly what the brain does. Like so much else in capital-L Life, connections in the brain may be emergent: the developing brain lays out its thinking cells in a nearly random mixture, and then wires them up after the fact. [read more..]