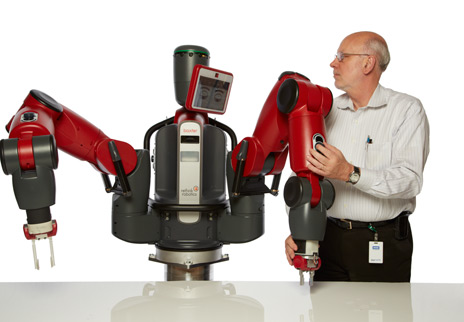 In the center of an otherwise unremarkable office stand six large robotic torsos mounted on pedestals and positioned along a bench that’s covered with piles of plastic widgets.

One robot methodically moves widget after widget onto a conveyor belt, the animated face on its LCD screen displaying an expression of quiet concentration. The task is mundane, but the robot is not: This is Baxter, the culmination of nearly five years of secretive development, based on the vision of Rodney Brooks, possibly the world’s most celebrated roboticist. Now founder, chairman, and CTO of Rethink Robotics, the company that built Baxter, Brooks has his sights set characteristically high: to unleash a revolution in manufacturing with a friendly faced factory robot.  [read more..]