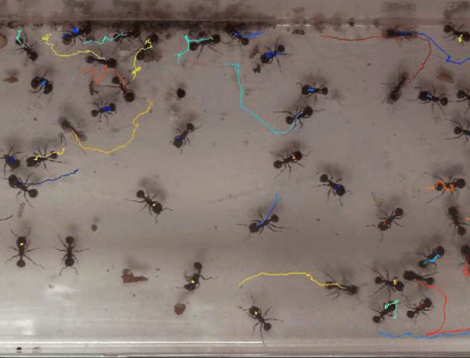 Stanford University biology professor Deborah Gordon loves ants. She’s got pictures of them on her walls, sculptures of them on her desk, and about 8 000 live ants running around her lab. She’s been studying them for more than 20 years. Recently, when she came to understand how colonies of harvester ants regulate foraging—that is, how they decide how fast to send out ant to gather food—she thought that the ant algorithm could apply to other types of networks.

Gordon went to Balaji Prabhakar, a professor of computer science and electrical engineering at Stanford University, with her idea. Prabhakar realized that the way her harvester ant network worked sounded a lot like Transmission Control Protocol (TCP), the algorithm that keeps the data traveling the Internet from bogging down when congestion increases or bandwidth decreases. The two set up a series of experiments to test the theory. They considered food in the ant world to be similar to bandwidth in the computer world; by manipulating the amount of food available they simulated changes in network bandwidth and watched to see if the ants adjusted in the same way a computer network operating under TCP would adjust, that is, by sending out less packets (or ants). The parallels were uncanny. [read more..]