Will Marvell’s Under-$30 Cloud Server Make Teachers and Students Smile? 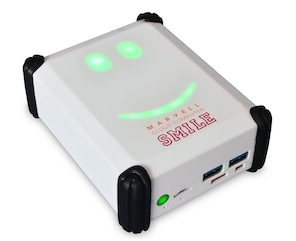 We’ve seen a lot of visions over the years as to just how computers should be used in the classroom. In my relatively well-funded district, we’ve had computer labs that kids were scheduled to visit regularly, Kindles in the library, and carts full of laptops wheeled into rooms for student use; neighboring schools are testing textbooks on iPads. For the developing world, the One Laptop Per Child (OLPC) organization has for years been working to make cheap, rugged, low-power laptops available for use in education. For the most part, all of these efforts involved buying hardware and getting it onto student desks.

But earlier this week, researchers from Stanford University and Marvell Semiconductor Inc. dared to upset the conventional wisdom. They introduced a micro-cloud computer, the Smile Plug, and educational software, which they call Smile (for Stanford Mobile Inquiry-based Learning Environment, an approach already tested in 22 countries). [read more..]