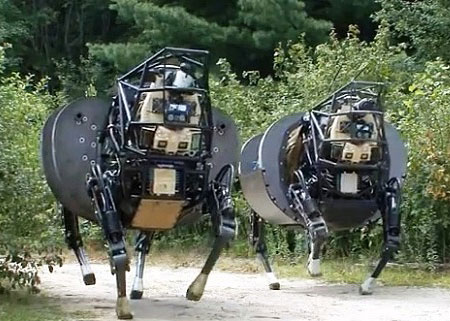 I’m not exactly sure what you’d call a group of Boston Dynamics’ LS3 “AlphaDog” robotic pack animals. A herd, I guess? Two LS3s might not quite constitute a herd, but it’s certainly impressive to see both of them in operation, and just as impressive is this demonstration of some new features including autonomous person following and a much quieter engine.

LS3 has learned how to use its sensors to follow people around through all sorts of terrain, and the robot is learning how to obey verbal commands and gestures, all skills that will be important as LS3 trots toward its goal of carrying the gear for a squad of soldiers (about 400 pounds worth) for 20 miles without needing a break. [read more..]