Simple Solutions based on Nanotechnology Help Flood Victims in Thailand 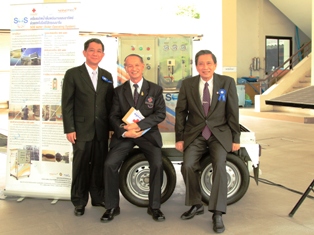 This week the BBC covered some of the technologies that have been developed and are being planned to cope with the floods that have plagued Thailand in the past year. You will have to go to the link provided to see the video as the BBC has made it impossible to embed it.

Not all of the technologies described involve nanotechnology, but two of the most interesting do. Both were developed by the National Nanotechnology Center in Thailand (Nanotec).

One uses silver nanoparticles for a water filtration system that operates on solar power, called the SOS Water System. The genius of it is its portability—it’s shown mounted on a small boat, purifying water from the flooded river it’s floating on. Though small, the system is capable of purifying a remarkable 200 liters per hour. [read more..]