A Robotic System to Scan and Reproduce Object 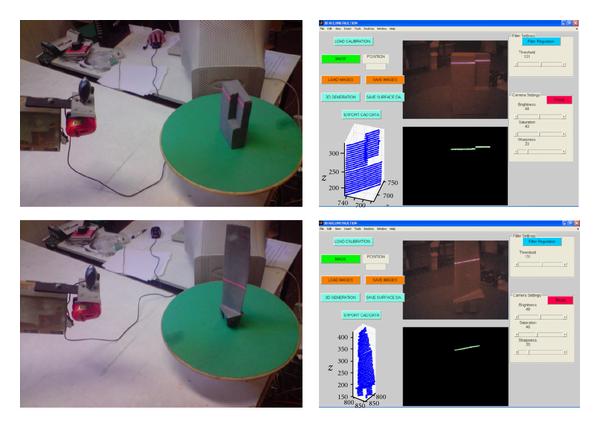 An application of a robotic system integrated with a vision system is presented. The robot is a 3-axis revolute prototype, while the vision system essentially consists in a laser scanner made up of a camera and a linear laser projector. Both the robotic and the video system were designed and built at DIME (Department of Mechanical Engineering for Energetics), University of Naples Federico II. The presented application essentially consists of a laser scanner that is installed on the robot arm; the scanner scans a 3D surface, and the data are converted in a cloud of points in the robot’s workspace. Then, starting from those points, the end-effector trajectories adopted to replicate the scanned surface are calculated; so, the same robot, by using a tool, can reproduce the scanned object. The software was developed also at the DIME. The adopted tool was a high-speed drill, installed on the last link of the robot arm, with a spherical milling cutter in order to obtain enough accurate surfaces by the data represented by the cloud of points. An algorithm to interpolate the paths and to plan the trajectories was also developed and successfully tested. [Read More]