A Dumb 3-D Printer is a Million-Dollar Idea 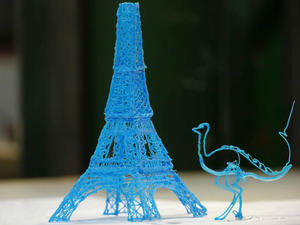 Inkjet printing didn’t kill the market for crayons, markers, and other “dumb” drawing tools. So why not a not-smart, hand-held version of a 3-D printer? That’s the concept behind 3Doodler, a Kickstarter project launched earlier this week by WobbleWorks, a toy company in Somerville, Mass. WobbleWorks’ idea is to use a pen-shaped gizmo and rolls of ABS plastic, a feedstock used in many of today’s 3-D printers, to let people draw 3-D shapes. I’m guessing the process will be somewhat meditative; you’ll have to draw slowly enough to let the plastic cool enough to support your structure; the video on Kickstarter appears to be sped up a bit. So it might not be as easy as it looks, but the minute I saw the “doodled” Eiffel Tower, I wanted to get my hands on this gadget. [Read More]