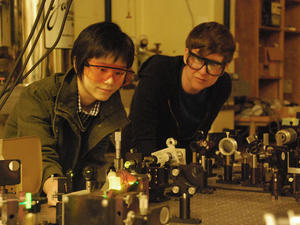 Nanowires made from III-V semiconductors like indium gallium arsenide are having a bit of run of late. Yesterday, I reported on a new method for growing them on graphene.

Now researchers at the University of Cincinnati have discovered that a newly developed architecture for semiconductor nanowires has a hidden nook in which to find electrons and holes. The discovery opens up a new understanding of the fundamental physics of nanowires. [Read More]