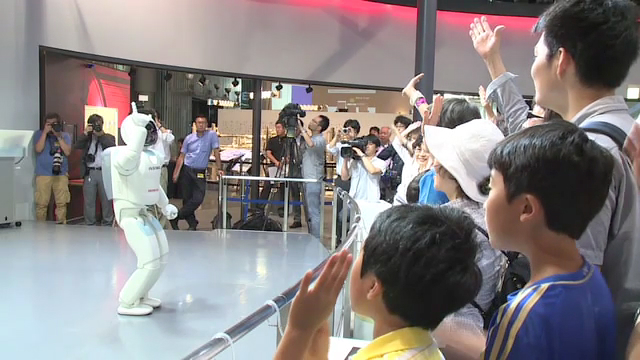 Honda’s famed humanoid robot ASIMO has many skills, including running, serving drinks, hopping on one foot, and kicking a soccer ball. And itabsolutely loves to dance. But despite its capabilities, the reality is that most of ASIMO’s actions are pre-programmed, and the humanoid relies heavily on hidden operators monitoring the robot’s every move and triggering its responses, like the man behind the curtain in The Wizard of Oz. Now Honda wants to change that and it has recently started testing new autonomous behaviors for ASIMO at a Tokyo museum. The new gig, however, seems to have had a rough start.

Following several prototypes, Honda unveiled the first version of ASIMO more than a decade ago. Since then the robot has been redesigned twice and Honda has steadily pushed the robot out of the nest, taking it all over the world for a variety of public presentations. The demonstrations are carefully choreographed, with an entourage of engineers keeping track of things behind the scenes. So when the company unveiled the latest version of the robot in 2011, it said it was moving it gradually towards more autonomy. [Read More]