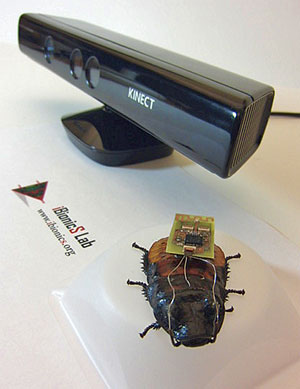 Microsoft’s Kinect, the motion-sensing system that lets users play Xbox games without a controller, has been repurposed for many a hack, from steering RC cars to Whole Foods shopping carts. Now, researchers at North Carolina State University say they’re employing the video game technology to gather information about how best to control a swarm of circuit-equipped cockroaches. Once the system is refined, a troop of these roach biobots could be sent into the wreckage of a collapsed building or an earthquake, in order to save your life.

Late last year, the NC State engineers demonstrated how they could direct a remote-controlled roach through an S-shaped course with a 10 percent success rate. In this iteration of the experiment, the electronic backpacks lugged by the roaches—which take over their movements in a kind of creepy robo-possession—remain the same. But now, each twitch and turn by the bugs through the course is no longer controlled by a human in real-time. Instead, these robo-roaches are on “autopilot,” their paths plotted out by computers. [Read More]