Building Bloodhound: The Fastest Car in the World 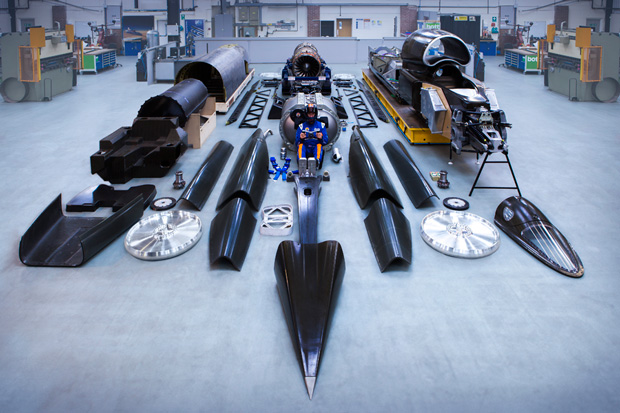 In a suburb of Bristol, in western England, not far from the Welsh border, a band of engineers are building a machine that they hope will make the biggest jump in the century-long history of the official world land-speed record, taking it from a smidgen above the speed of sound to 1,600 kilometers (1,000 miles) per hour. That’s roughly the cruising speed of a fighter aircraft, but it’s considerably harder to achieve at ground level, where the atmosphere is far thicker. And there’s the not-insignificant danger that the vehicle will end up plowing into the ground.

Even in the complicated business of breaking such speed records,Bloodhound represents a remarkable array of firsts in terms of technology, engineering techniques, and propulsion systems, all set to send the missile-shaped car down a nearly 20-km-long racetrack in the South African desert toward the end of this year. Perhaps the most striking of those firsts is the project’s method of verifying the safety of the design. To a degree that would be unthinkable today, earlier record attempts relied on overengineering, best-guess estimates, intuition, and sheer luck. Earlier generations of engineers would often discover a car’s limits with destructive testing—running it until it broke. Now modeling and data acquisition, the preferred tools for designing both aircraft and cars, are making headway in this most extreme of sports. Bloodhound is the first project of its kind to apply them. By the time the car makes its great bid for the record in South Africa, it will have done the run 1,000 times in silico.  ….[Read more]