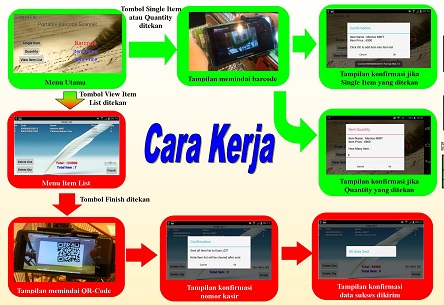 Waiting time during transaction at the cashier often make a very long queue at every supermarket. This is because scanning process that happen at the cashier takes a very long time to be done. Therefore we conducted this research about portable barcode scanner. Research methodology that are being used is starting from determining the device that will be used, applications planning, database planning, topology design and system testing. The device that will be used is an Android based device and application planning using Android Development Tools. In general, this system consists of local server, Android device, and access point. Android device’s function is to do scanning process of a barcode and as a temporary storage from the data from a barcode that has been scanned. Local server’s function as a storage for data’s information and as a temporary storage for data that was sent from Android device before it could be accessed by the cashier’s computer. Access point’s function is to connect between Android device with network that will connect to the server. Results shows a high accuration of scanning process and sending data, above 95% when scanning barcode and above 98% when sending the data, and also 100% compatibility of data that was sent to the cashier’s computer and with the cashier’s computer received. Furthermore, the time when retrieving data have an average of below 50 seconds when 1000 times of retrieving data performed simultaneously. Accuracy level depends on the power of the signal when the system is running, and the speed of retrieving data highly depends on the specification of the Android device that being used.