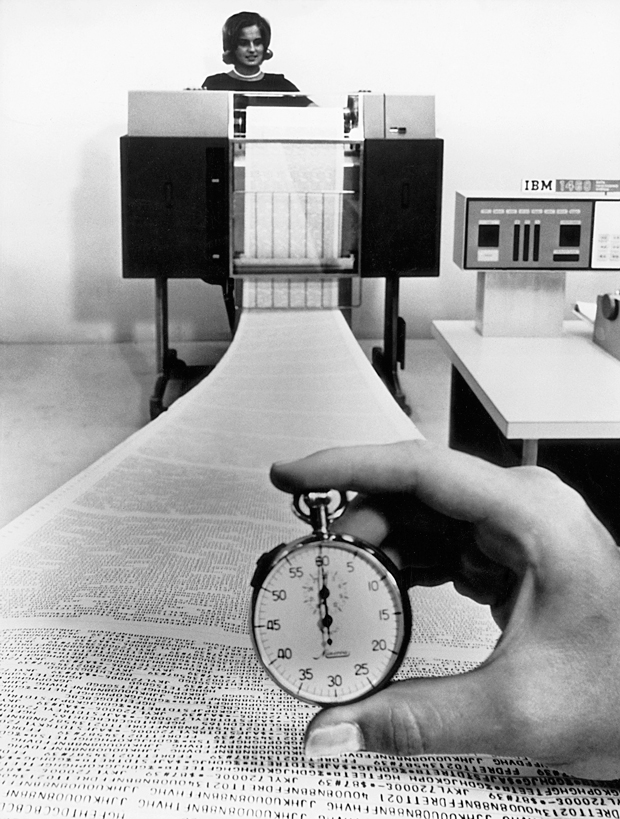 Introduced in October 1959, IBM’s 1401 data-processing system was one of the first transistorized computers ever sold commercially. The 1401 marked the transition from wiring panels and punch cards to stored programs and magnetic tape drives, and it offered performance and versatility at a price that even small businesses could afford—about US $6,500 per month ($54,000 today). Systems with similar features were much larger and cost about six times as much, according to this IEEE Spectrum article, which recounts how a group of engineers rebuilt an IBM 1401. Within a month of its debut, IBM took 3,000 orders for the machine, which was more orders than there were computers in existence at the time. By 1965, nearly half the computers in the world were 1401s.

The 1403 printer was incredibly fast. It had five identical sets of 48 embossed metal characters like the kind you’d find on a typewriter, all connected together on a horizontal chain loop that revolved at 5.2 meters per second behind the face of a continuous ream of paper. Between the paper and the character chain was a strip of ink tape, again just like a typewriter’s. But rather than pressing the character to the paper through the ink tape, the 1403 did it backward, pressing the paper against the high-speed character chain through the ink tape with the aid of tiny hammers.

Over the years, IBM came out with eight models of the 1403. Some versions had 132 hammers, one for each printable column, and each was individually actuated with an electromagnet. When a character on the character chain aligned with a column that was supposed to contain that character, the electromagnetic hammer for that column would actuate, pounding the paper through the ink tape and into the character in 11 microseconds.[Read More]