Nanogrids, Microgrids, and Big Data: The Future of the Power Grid 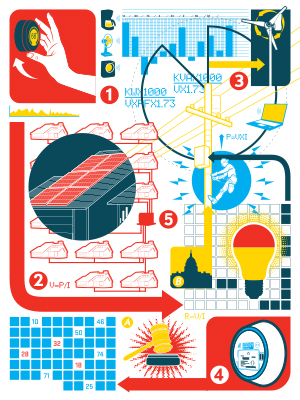 Developing technology is like driving a race car: You push the machinery as fast as it’ll go, and if you can avoid a crash, a prize awaits you at the finish line. For engineers, the reward is sometimes monetary, but more often it’s the satisfaction of seeing the world become a better place.

Thanks to many such engineers driving many such race cars, a lot of progress is about to happen in an unexpected spot: the electricity sector. The power grid’s interlocking technological, economic, and regulatory underpinnings were established about a century ago and have undergone only minimal disruption in the decades since. But now the industry is facing massive change.

Most observers are only vaguely aware of the magnitude of this overhaul, perhaps because it’s a hard story to tell. It doesn’t translate well to a set of tweets. Many people have come to think of the electric-utility business in much the same way they think of their taxes—boring, tedious, and somehow, always costing more money.

What’s happening in this industry stems from technology improvements, economic forces, and evolving public priorities. As the changes dig away at the very foundation of the electricity sector, the results are likely to be anything but boring. Yet they may well cost you more money.

For about a century, affordable electrification has been based on economies of scale, with large generating plants producing hundreds or thousands of megawatts of power, which is sent to distant users through a transmission and distribution grid. Today, many developments are complicating that simple model.[Read More]