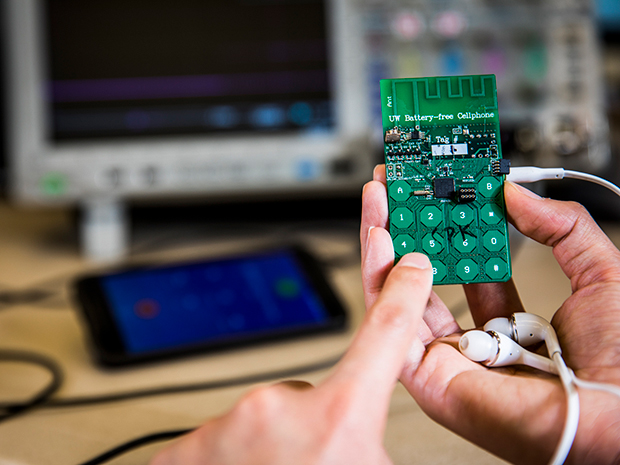 Batteries can be a real drag. They’re expensive and must be constantly recharged. Though some battery-free sensors can passively transmit small amounts of data, most consumer electronics today still rely on bulky batteries to store power.

A team from the University of Washington has built a battery-free cellphonethat can harness power from radiofrequency (RF) waves sent to it from a nearby base station. The phone not only harnesses the power it needs to operate from those waves, but can also place a voice call by modifying and reflecting the same waves back to the base station, through a technique known as backscattering.

To place or receive a call, the entire device consumes just 2 to 3 microwatts of power. The group’s design supports only voice calls—there’s no data plan—but its creators say it would still prove quite useful in certain circumstances.

“Imagine a scenario where your phone died but you could at least have enough power to make a 9-1-1 call,” says Vamsi Talla, who built the phone while a post-doc in electrical engineering at the University of Washington. “That could be a lifesaver.”

Many of today’s passive sensors transmit data only occasionally–perhaps every minute or so—due to power constraints. Or, in the case of RFID tags, some passive sensors must be very close to a reader to harness enough power to transmit a message.

In a conference paper published earlier this month, Talla, who now serves as chief technology officer of Jeeva Wireless,[READ MORE]