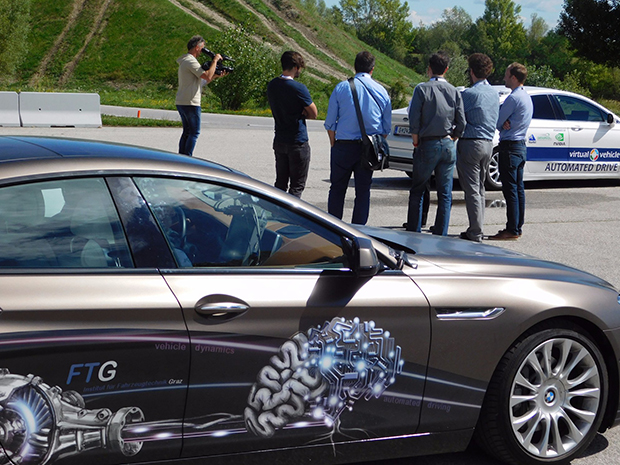 Researchers from academia and industry took rides in experimental cars at a public test-track event in Teesdorf, Austria, last week, but the main draw may have been the other attendees.

The event gave smaller companies a chance to try out driverless technology on a shared large-scale test track. Formal vehicle testing on closed tracks can cost up to £1000 (US $1320) a day. “We thought we could do something that was a bit different: combine the opportunity for small companies and university teams,” says event organizer Alex Lawrence-Berkeley, of Sense Media Group in London, England.

The workshop component of the event focused on software aspects of advanced driver assistance systems (ADAS), positioning technology, and open standards for allowing different types of driver assistance systems to interact. On the hardware side, electrical engineer Daniel Watzenig of the Virtual Vehicle Research Center in Graz, Austria, demonstrated the center’s so-called Virtual Vehicle, which is actually a real car licensed for testing autonomous driving technology. Watzenig had earlier told the event organizers that part of the value of the event is improving public visibility of autonomous vehicle research.

The track day was one of an ongoing series of meet-ups, track days, and other events that Sense Media has been organizing around Europe to create a community of university researchers, students, and the enormous ecosystem of smaller companies that supply components and smarts to larger car manufacturers. The nearest comparison in the United States might be Self Racing Cars, a series launched in 2016 at an Autonomous Track Day in Willows, California. It includes both full-size and scale-model vehicles.

While cars with the most self-driving functionalities get the most media attention, right now vehicle manufacturers of all kinds are desperate to recruit people who can help them with ADAS, Lawrence-Berkeley says. He calls recruiting in that sector “unsustainable” and one of the reasons why industry partners are supporting the events he is organizing: They are on the lookout for car engineering talent with software chops.

Steffen Hemer, a robotics graduate student at Technical University Kaiserslautern in Germany and a volunteer organizer of Formula Student Germany, says that engineering students with computer science or robotics experience are indeed finding the greatest number of opportunities in the automotive job market. As for the self-driving track day, he says the most valuable part for students may not be testing the cars so much as meeting the experts with whom they will one day work.