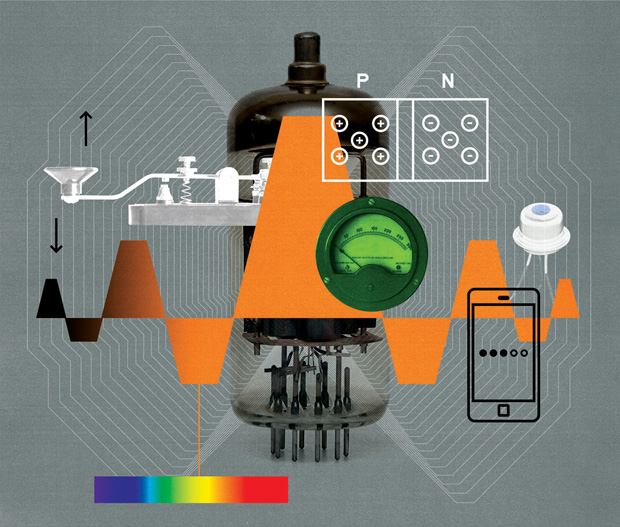 Cellphones as a fifth-order elaboration of Maxwell’s theory

Now that the world has become addicted to portable electronics, billions of people have come to see the companies providing these gadgets as the most innovative, and the people who head those companies as the most exalted, of all time. “Genius” is a starter category in this discussion.

But clever and appealing though today’s electronic gadgets may be, to the historian they are nothing but the inevitable fifth-order elaborations of two fundamental ideas: electromagnetic radiation, the theory of which was formulated by James Clerk Maxwell in the 1860s, and miniaturized fabrication, which followed Richard Feynman’s 1959 dictum [PDF] that “there’s plenty of room at the bottom.”

Maxwell was a true genius. The history of science offers few examples of work as brilliant as unifying electricity, magnetism, and light as aspects of a single phenomenon: electromagnetic waves. As Max Planck put it, “in doing so he achieved greatness unequalled.”

In late 1879 and early 1880, David Edward Hughes actually transmitted and received those invisible signals but did not publish his results. And in 1883, Thomas Edison also came very close to the actual use of such waves with his patent for an apparatus “showing conductivity of continuous currents through high vacuo.” He displayed it in 1884 at the International Electrical Exhibition in Philadelphia, then abandoned it as a mere curiosity.

That is why the second-order elaboration of electromagnetism came only between 1886 and 1888, when Heinrich Hertz deliberately generated and received electromagnetic waves whose frequencies he accurately placed “in a position intermediate between the acoustic oscillations of ponderable bodies and the light-oscillations of the ether.”