A Cheaper, Easier Resistance Standard on a Chip 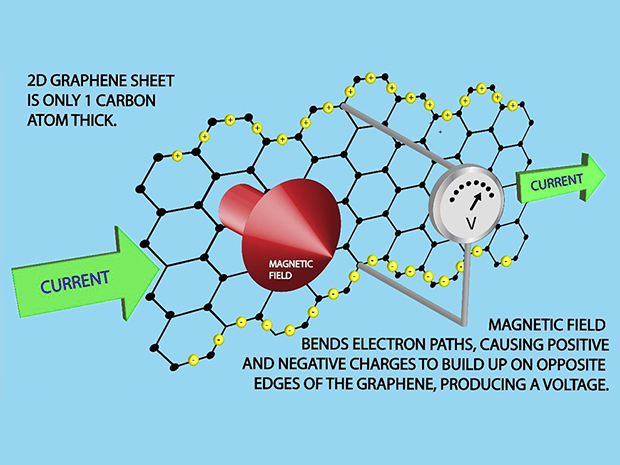 Researchers at the U.S. National Institute of Standards and Technology (NIST, Gaithersburg, Md.) and Carnegie Mellon University in Pittsburgh, Pa., have deposited a graphene film on silicon carbide to produce a quantized ohm-on-a-chip. The advance, several years in the making, promises a practical device for measuring electrical-resistance that is easier and less expensive to make, and less demanding to operate, than the current generation of standards fabricated from gallium arsenide (GaAs) and aluminum gallium arsenide (AlGaAs).

Both the graphene and the GaAs/AlGaAs standards depend on the integral quantum Hall effect: Under the right conditions of low temperature and strong magnetic fields, the resistance in a two-dimensional semiconductor can become quantized—an integer multiple (precise to within at least one part in a billion) of the ratio between Planck’s constant and the square of the electron charge (this works out to about 25,812.8 ohms).  When electrons move across the planar semiconductor at temperatures a few degrees above absolute zero, a perpendicular magnetic field pushes moving charges at right angles to their direction of motion—driving negative charge to one edge of the chip, positive charge to the other edge, and producing a voltage gap and a precisely quantized resistance in between.

In a paper in the journal Carbon, NIST researchers Yanfei Yang and Randolph E. Elmquist and their collaborators describe the production and performance of a highly homogeneous, 5.6-millimeter-square sheet of graphene—a one-atom-thick hexagonal lattice of carbon—to serve as the two-dimensional Hall effect semiconductor. (An arXiv preprint of the paper is also available.)

Conventional GaAs/AlGaAs quantum Hall devices typically operate at 1.2 Kelvin or below and require magnetic fields higher than 5 Tesla (5 T, stronger than the fields used for magnetic resonance imaging), Elmquist observes. They are also limited to currents of 20 to 80 microamperes at one volt or less.

“But with graphene, which is an exceptionally good conductor for a 2D material, we’ve seen full quantization as low as 2 T,” Elmquist said in an NIST statement. “[This] allows us to use a much smaller magnetic apparatus that can be placed on a tabletop. Some devices are still perfectly quantized at temperatures as high as 5 K, and we have observed critical currents as high as 720 microamps, which is the highest ever observed for a QHE standard.”

The upshot is that if it’s possible to conduct measurements at such high currents, you can accurately calibrate a room-temperature resistor of similar value, like a 1 kilo-ohm or 10 kilo-ohm resistor. With lower field, higher temperatures, and higher current, you can have a much simpler system: a closed-cycle refrigerator where you won’t need liquid helium,” he said. “By contrast, we run the NIST gallium arsenide system only twice a year because of the expense and difficulty of running the liquid helium system.”