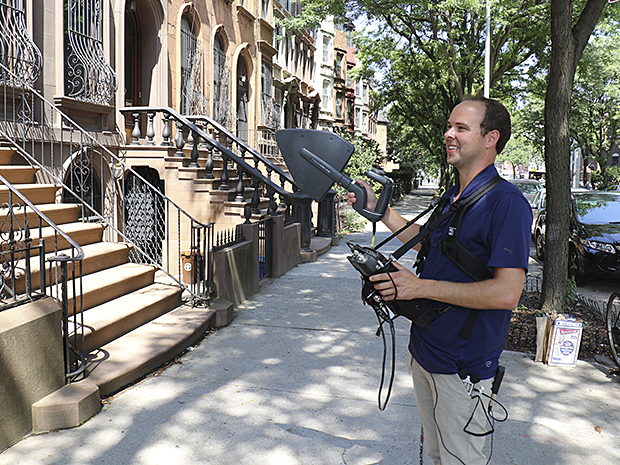 It’s midday in Crown Heights, Brooklyn, and Kevin Argentieri is walking around a residential neighborhood brandishing a large gray arrow, like a medieval knight would wield a sword.

First, Argentieri stands in the middle of a sidewalk and holds the arrow out in front of him. Then, he rotates it and waves it down a street. Next, he points it directly at a house. All the while, he glances down to monitor live readings from a boxy console strapped to his chest.

The whole set-up looks rather bizarre, and somewhat suspicious in a city that constantly reminds its residents: “See something? Say something.” Curious passersby frequently ask if he’s searching for gold or looking for ghosts.

What he’s actually doing, he tells them, is trying to improve their cell phone reception. Argentieri works for P3, a company that performs radio-frequency interference hunting for nationwide carriers including Verizon, AT&T, T-Mobile, and Sprint. The device he’s waving around is a portable spectrum analyzer, a machine that helps him home in on sources of interference.

Each morning, Argentieri sets out to track down devices that are causing interference, and then tries to persuade their owners to shut them off. This is a delicate process that involves knocking on strangers’ doors, searching their homes for the offending device, and politely reminding the owner that they could be fined up to US $16,000 a day for keeping the gadget switched on.

American carriers pay big bucks to the U.S. Federal Communications Commission for exclusive licenses to swaths of the radio-frequency spectrum. In the United States, popular LTE bands include 700 megahertz, 1900 MHz, and 2.5 GHz. Once a license is sold, the FCC prohibits anyone else from transmitting in these bands.[READ MORE]