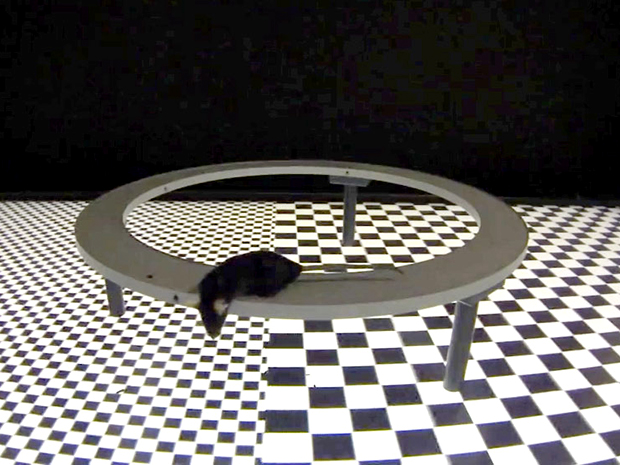 Scientists have devised a virtual reality platform for lab animals. Let that sink in. Zebrafish have swum with the aliens from the video game Space Invaders, mice were afraid of virtual heights, and fruit flies circled illusory obstacles.

This new holodeck for animals can help researchers see how freely-moving animals respond to a variety of illusions—work that could help scientists better understand human genes and brain circuitry, researchers say. The researchers, from the Vienna Biocenter in Austria, detailed their findings in today’s edition of the journal Nature Methods.

FreemoVR, immersed animals in arenas where the walls or floors were computer displays. Each screen depicted photorealistic images that accounted for each animal’s perspective as it walked, flew, or swam.

Up to 10 high-speed cameras monitored the precise 3D position of each animal. FreemoVR then updated its video imagery within milliseconds of each animal’s movements to create the 3D illusion that they were moving in environments that changed in response to their actions.

The researchers compared FreemoVR to the holodeck, “a fictional environment in [the TV show] Star Trek in which humans enter a computer-controlled virtual world,” says Andrew Straw, a neurobiologist at the Vienna Biocenter who was co-senior author of a paper detailing the study. “They can freely move, have no need to wear special clothing or headgear, and are immersed in a computer-controlled environment, which can be made completely realistic or arbitrarily unrealistic.”[READ MORE]