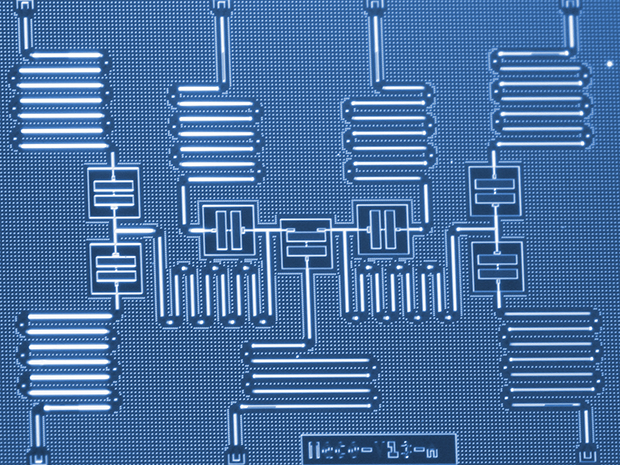 Someday, engineers will build large quantum computers that can solve currently impossible science problems, crack unbreakable encryption, and make artificial intelligence smarter. In the meantime, companies building quantum computers are trying to figure out how to use the small ones they expect to build in the coming years.

Decades of theoretical work suggest that quantum computers—perhaps even relatively small ones—will someday be able to solve important problems in chemistry that are intractable on existing computers. But before they can take on big challenges like understanding photosynthesis and improving catalysts for making renewable fuels, researchers have begun simulating small molecules and atoms. And so far, they haven’t gone far beyond what a math-savvy chemist can do with a pen and paper.

This week in the journal Nature, researchers at IBM describe using a small quantum computer to simulate more complex molecules. The IBM team used six of the quantum bits (qubits) on a seven-qubit system to push into the second row of the periodic table, simulating molecules as large as beryllium hydride (BeH2). What’s significant, says Jerry Chow, manager of experimental computing at IBM research, is how they did it: by developing more sophisticated algorithms that could carry out the simulations on a small, noisy quantum computer.

Beryllium hydride is easy to simulate on a classical computer. It’s the kind of thing theoretical chemists like Markus Reiher call a “toy problem.” But this kind of work must be done in order to make useful quantum computers “that can solve chemical problems where classical computation reaches its limits,” says Reiher, who’s based at ETH Zurich.

On a classical computer, the difficulty of chemical simulations scales exponentially with the size of the problem. To do useful work, researchers make approximations, which works much of the time. But sometimes, quantum effects that are impossible to simulate are key to understanding the chemistry. Quantum computers can represent quantum states such as the energy levels of electrons more naturally. So if companies can make a large one, they should be able to solve chemistry problems more exactly—and tackle problems that are currently impossible.

When will quantum computers be able to solve a useful problem that classical computers can’t? We don’t know the answer yet. Today’s quantum computers have fewer than 20 qubits. The more qubits engineers add, the more noise there is in the system, and the harder it becomes to do anything useful. Google has announced that its team is working on a 49-qubit system that should outperform a classical computer on some (probably not practically useful) task—a milestone called quantum supremacy.

Some chemists suspect that solving important chemistry problems will require hundreds of thousands or millions of qubits, in order to correct errors that arise from noise. Others—including those working at IBM and Google—believe it will be possible to do useful chemistry with fewer than 100 qubits. As they try to build larger systems, the big question for these companies is “how do you get value from a quantum computer in the next few years?” says Jay Gambetta, who works on quantum computing and information theory at IBM Research.

The IBM team hopes the chemistry community will help them find out. The company has made a 16-qubit quantum computer accessible over the cloud, and has posted quantum chemistry algorithms researchers can use to simulate small molecules.[READ MORE]