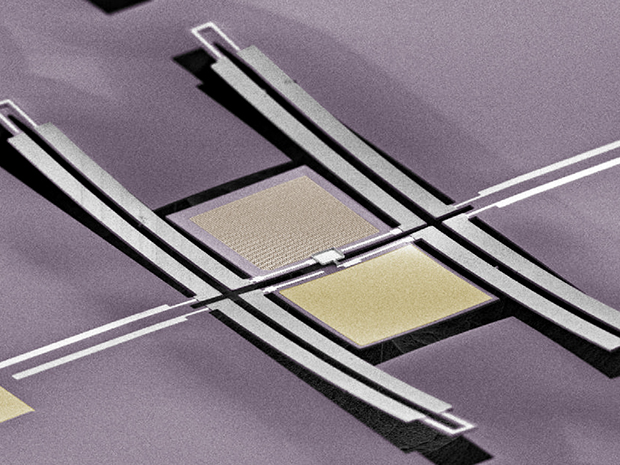 Researchers at Northeastern University in Boston have developed an infrared sensor based on plasmonics that is capable of turning itself on when it needs to perform its sensing duties and then turns itself off when not needed to decrease energy demands and increase its lifetime.

The result is a sensor that performs only event-driven sensing. The sensor is dormant, yet is always alert and it awakes only in the presence of a signal of interest. As a result, the sensor only consumes power when there is something to be detected.

In research described in the journal Nature Nanotechnology, the Northeastern researchers used plasmonic nanostructures that take the form of nanoscale gold patches to act as tiny mechanical switches that take energy from the signal of interest—in this case a specific wavelength of infrared light—and mechanically close the contacts of the switches to create a low-resistance electrical connection.

“When infrared light hits the device, the optical energy is absorbed by an integrated ultra-thin plasmonic infrared absorber and converted into heat,” explained Matteo Rinaldi, associate professor at Northeastern and co-author of the paper, in an e-mail interview with IEEE Spectrum. “The induced heat increases the temperature of a pair of bi-material beams in the device, which then bend due to thermal expansion and bring one piece of metal into contact with another.”

Plasmons, the waves of electrons that move along the surface of a metal after it’s been struck by photons, are the key to engineering the infrared (IR) light absorption in these tiny mechanical switches. The plasmonic phenomenon make it possible to achieve strong and spectrally selective absorption of light in very tiny structures that would not be possible otherwise given the relatively long length of wavelengths of light.

“Thanks to such a spectrally selective absorption, our devices are triggered only by light in a predetermined narrow spectral band,” said Rinaldi. “Furthermore, two switches fabricated on the same chip can have different triggering wavelengths thanks to the plasmonic-enabled capability of lithographically defining light absorption properties, resulting in the capability of detecting and discriminating different spectral signatures (specific wavelengths of light) by using multiple spectrally selective tiny switches to form a passive hardware logic.”

The Northeastern team’s plasmonic absorber is composed of a three-material stack: a 100 nanometer dielectric layer sandwiched by an array of 50 nanometer gold nano-patches on the top and 100 nanometer platinum plate on the bottom.

In this arrangement, highly localized gap plasmons are excited when electromagnetic radiation of a specific spectral band impinges on the array of nanostructures. These localized gap plasmons effectively traps the light within the thin dielectric gap between the nanostructures and the continuous metal layer, inducing a relatively large and swift increase of temperature in the absorber.

A critical aspect to the function of the device is the nanoscale air gap separating the contacts of the switches. The smaller the gap is the smaller the amount of absorbed light power is needed to close it. [READ MORE]