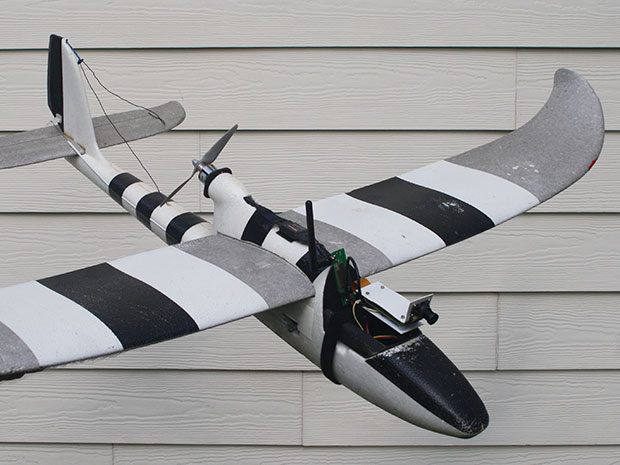 I’m preparing to return to a pastime that I gave up a few years ago: flying radio-controlled model airplanes by first-person view, or FPV. This is where you control the plane while viewing live video transmitted from an onboard camera to the ground. I quit this hobby when the FAA issued an interpretation of the law that forbade flying model planes this way. In a nutshell, it defined a model aircraft as something you kept in sight at all times. Having video goggles or other visual aids (besides eyeglasses) blocked your view, so it wasn’t okay to fly with them under model aircraft rules.

But the FAA opened the door to FPV again last year with its Small UAS Rule [PDF], which allows this kind of flying if you are certified as a remote pilot, as I’ve recently become. So I’ve been dusting off my FPV gear and exploring what’s new in the hobby.

One thing that caught my eye was an HD digital-video system called Wifibroadcast. It’s a collection of open-source software that uses ordinary Wi-⁠Fi dongles and Raspberry Pi hardware at each end to provide telemetry, recording capability, and high-resolution video for FPV. What’s more, the Wi-⁠Fi transmitter and receiver don’t need to associate (which requires them to be able to communicate back and forth rather than the receiver simply listening to a signal broadcast by the transmitter). So the video link degrades gracefully with distance instead of abruptly shutting down at the point when it would be impossible to maintain an associated connection. What better way to get back into FPV than with low-cost HD video?

So I purchased the gear and installed it on a model airplane. I needed to hack the open-source code a little to get it to work properly with my flight controller and GPS, but that wasn’t too hard. It was a little more work to figure out how to mount a Raspberry Pi Zero and a camera module on my plane in a fashion that allowed a servo to pan the camera left and right.

Although the video transmissions would be blaring out on the 2.4-gigahertz Wi-Fi band via a dongle plugged into the Pi, I thought radio interference between the electronics used to control the plane itself and the video equipment wouldn’t be a problem for me: Unlike nearly everyone else in this hobby, I still use a radio controller that operates at 72 megahertz.

Once I had things working on the bench, I took my gear to a nearby cornfield, where a test flight showed that the 160-degree lens I was using with the camera module was awkwardly wide. The lens distorted the horizon badly—and the focus wasn’t set so well. On the upside, the Wifibroadcast’s HD video transmissions were rock solid. But it didn’t take long for me to realize that my radio-control link was compromised, at which point I landed in a hurry.[READ MORE]