A Slide Rule for Real Programmers 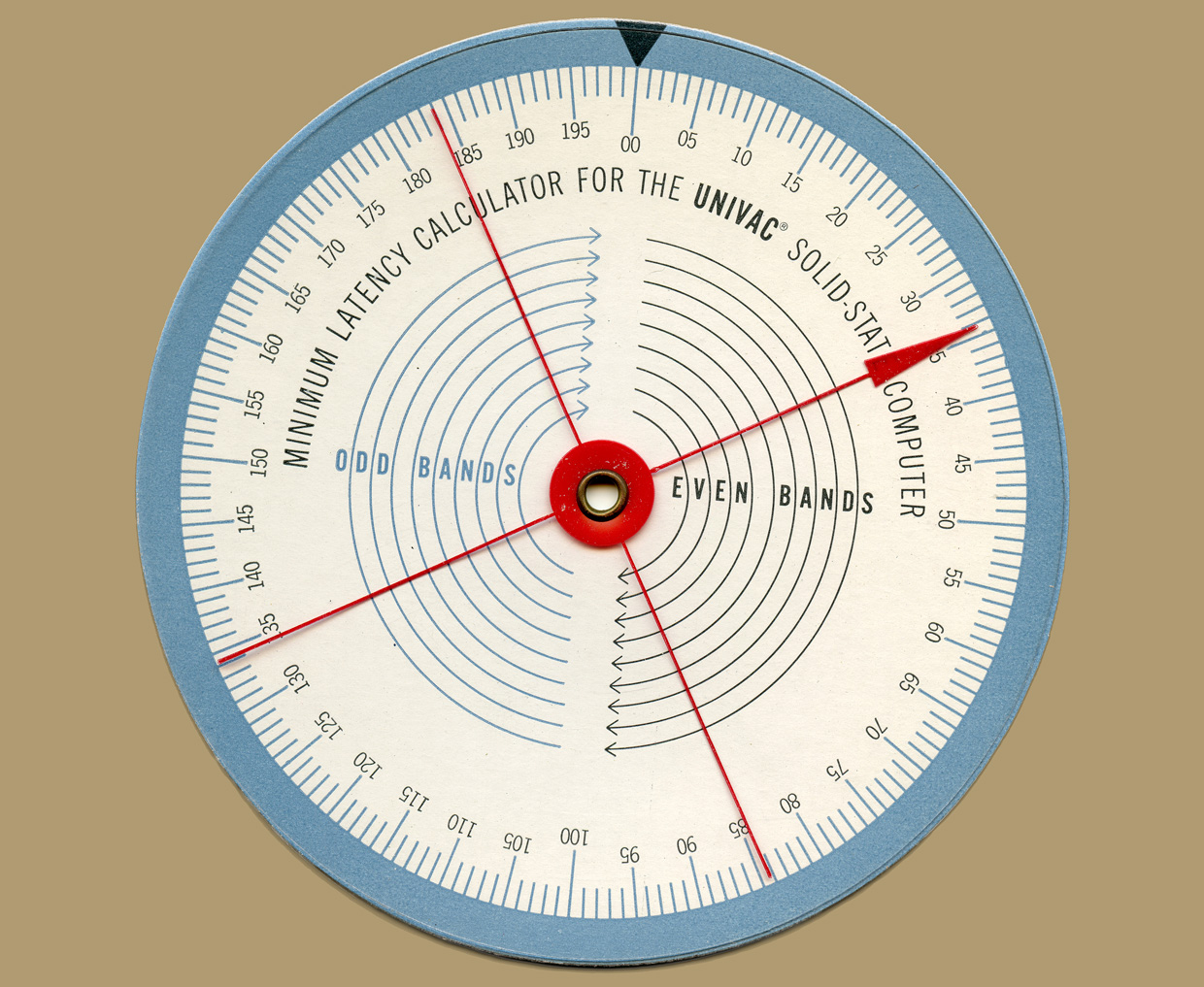 When does your computer need a slide rule? When it is the UNIVAC II. This special-purpose 1950s circular slide rule from Remington Rand was used by programmers to optimize how the room-size mainframe executed instructions. The computer had a drum memory that was constantly rotating, and the most efficient program would position the drum so that the next instruction would begin executing wherever the current instruction finished. Instructions were thus scattered across the drum and not physically adjacent to each other. To minimize rotational delays, a programmer had to figure out each instruction’s execution time in order to queue up the next command, an approach called minimum latency programming. The slide rule was intended to help programmers make those calculations.

Computer programming was just one of many uses for the slide rule, which had been invented in the 1620s by William Oughtred as an aid for multiplication and division. Around 1850, Victor Mayer Amédée Mannheim added the cursor or indicator—which he called a runner—to help users align the slide rule’s scales and easily read off the result. On all of these instruments, the scales were divided logarithmically.

By the late 1800s, general-purpose slide rules had become a common tool for engineers. The most familiar form is the linear slide rule, but there were also circular ones like the UNIVAC’s as well as cylindrical slide rules.

In addition to performing basic arithmetic, slide rules were used to find logarithms, square roots, and trigonometric functions, or anything with a regularly repeating ratio. The Ohm’s Law Calculator, produced by the Perrygraf Corp. for the Ohmite Manufacturing Co. of Chicago, helped electricians calculate volts, amperes, watts, or ohms, depending on what measurements were known. A separate slide indexed to Ohmite’s parts catalog helped you pick the appropriate stock number.

With the advent of the handheld electronic calculator, many slide rules were relegated to the back of a desk drawer and forgotten. Fortunately, large collections have been preserved in museums, showcasing the variety of this once-ubiquitous tool. The MIT Museum has more than 600 slide rules in its permanent collection, most of them from the Keuffel and Esser Co., which dominated the U.S. market during the 20th century.

As for the UNIVAC, much of that history has been well documented. J. Presper Eckert and John Mauchly, who built the ENIAC (Electronic Numerical Integrator and Computer) at the University of Pennsylvania in 1943, formed their own company to develop additional computers. They started with the BINAC (Binary Automatic Computer) in 1949 and then, showing little imagination for product naming, introduced the UNIVAC in 1951.

After the death of its chairman and chief financial backer, the Eckert-Mauchly Computer Corp. was sold to Remington Rand, which later merged with Sperry Corp. Throughout these mergers and corporate name changes, engineers continued to design and build several generations of UNIVAC computers. The last of these was the UNIVAC 1100/90, which came to market in 1982. Four years later, Sperry merged with Burroughs Corp. to form Unisys, which still offers technical services worldwide.

If you’d like to see a UNIVAC for yourself, you have plenty of choices. The Computer History Museum, in Mountain View, Calif., has a UNIVAC console and more than 1,500 related UNIVAC items in its collection. The Technikum29 museum, near Frankfurt, keeps a UNIVAC 9400 in running condition. Meanwhile, computer science students at the Universitat Politècnica de València, in Spain, used materials from the Museo de Informática to create a UNIVAC simulator. Seeing the machines in person gives a good sense of the vast scale of these early computers, while the simulator accurately re-creates how cumbersome it was to program them and how slowly they calculated. [READ MORE]