Modeling and Simulation for Meeting the Challenges of Battery Design 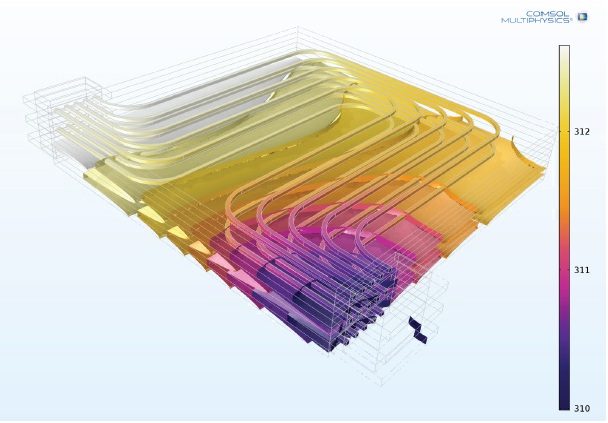 The biggest challenges for battery design are energy density, power density, charging time, life, cost, and sustainability. Modeling and simulation are very efficient methods that can assist researchers, developers, and designers in meeting these challenges.

The following is an excerpt from Multiphysics Simulation 2017.

The power density of a battery is important for the efficiency of electric vehicles. A high power density is required to recapture high amounts of energy in a short time during

regenerative braking or fast recharge. This gives a difficult optimization problem, since the system has to cope with very high current densities during recharge and relatively low current densities during discharge. It also relates to the design of the thermal management and the current collectors mentioned earlier. In addition, the design of fundamental battery components such as the electrodes, separator, and electrolyte are of great importance for power density.

Life is a major consideration where safety and reliability are closely related. Discharge, wear, and failure should occur slowly and in a controlled and transparent way. This is not only an issue of the chemistry of the battery, but also of the design, since uneven current density distribution and poor control of discharge/recharge and of the thermal management system may accelerate wear and increase the risks of failure. Short-circuits formed by metal deposition may be responsible for decrease in performance as well as an increased risk for runaway heating. Technologies for state-of-health monitoring are required in order to continuously assess the state of the battery system and the risks of failure.

The development of new batteries has to include the aspect of sustainability. There has to be a strategy for mining, recycling, producing, and disposing of new battery types. This is primarily a legal matter for governments, but also a commercial consideration for battery manufacturers and automotive companies.

The understanding and optimization of fundamental components of the battery; such as electrodes, electrolyte, and separator; can be accelerated using modeling and simulations. The systems for thermal management, current collection, and state-of-health monitoring can also be developed with high-fidelity multiphysics simulations.

Figure 1 shows a model for the optimization of the channels in the cooling plates of a battery pack. The is a common application in the automotive industry. For example, Fiat Research Center uses mathematical modeling for studying thermal management of pouch cells for hybrid vehicles1.