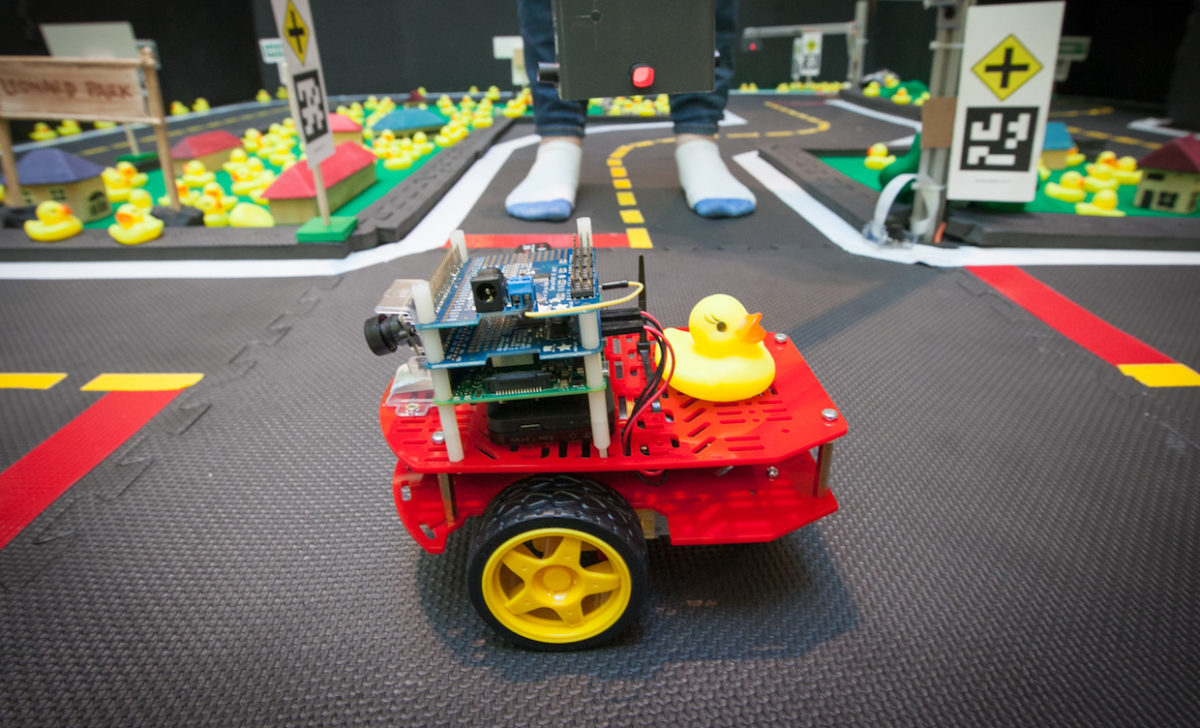 There is a strong and natural relationship between robots and rubber duckies. Seriously. Being small, cheap, colorful, and pleasingly compliant, duckies became a sort of physical Stanford Bunny—when you want to show the scale of a robot or give a robot something to visually locate or grasp or something, just toss a duckie in there. This relationship was formalized through the 2016 ICRA conference, where duckies inspired a bunch of videos and some poetry that is surprisingly not terrible.

Since then, duckies have been taking over in robotics—at this point, I’m fairly certain that Andrea Censi at ETH Zurich is held hostage by (and doing the bidding of) a small army of little yellow duckies. This would explain why an entire duckie village full of duckie-size autonomous cars that you can learn how to program is now on Kickstarter, with the hope that you’ll help them take over the entire world.

Duckietown is based on an MIT engineering course (2.166), first taught in 2016. It’s designed to be an affordable, modular, scalable, duckie-filled introduction to autonomous vehicles.

Some quick facts about Duckietown: Duckietown is located in Duckieland, which is somewhere in Canada. Or at least, most of the duckies are of Canadian descent and therefore very polite. The initial population was 1,600 duckies as of 2016, but it’s been growing, because duckies are cheap and you can just buy more of them. The national sport of Duckieland is marine robotics competitions, obviously. Also, Duckietown is the No. 1 most livable city in the world, according to its creators: It’s a place full of squeaky yellow joy.

Unfortunately, duckies are terrible drivers, probably because they don’t have arms or legs and their insides are filled with squeakers instead of brains. So to get from place to place, the duckies depend on little autonomous cars, which are programmed by MIT students. And now you’ll be able to program them, too:

Duckietown kits are already being used to teach practical robots to students around the world, and the idea with the Kickstarter is to help them scale up, providing robots and classroom kits that can do more for less money. At the moment, a Duckiebox full of everything you need to make a single Duckiebot is US $150, while a starter kit (which also includes road tiles, road tape, signs, and extra duckies) is $400. Enough Duckieboxes for an entire classroom (12 robots plus a nice big town layout) is $3,500, which is really not that expensive for what you’re getting. And of course, there’s software plus a substantial and growing curriculum to back all of this up. Even homework assignments, hooray!

The Duckiebots may not look all kinds of fancy, but they’re very capable little platforms, especially in the environment for which they’re designed. Their only sensor is an HD camera, and all of the autonomous driving computation is done on board with a Raspberry Pi 3. With just a single Duckiebot, you can go through practical, experimental lessons including “Modern Robotic Systems,” “Architectures,” “Representations,” “Modeling,” “Calibration,” “Signal Processing,” “Computer Vision,” “Estimation,” and “Control.” Toss a second Duckiebot into the mix, and things get more complex, and if you want to get superfancy, you can even add an Intel Movidius neural compute stick for end-to-end imitation learning and sim2real reinforcement learning transfer.

Andrea Censi from ETH Zurich, who’s also director of research at nuTonomy and president of the Duckietown Foundation, bears a significant amount of responsibility for this whole Duckietown business, and he was kind enough to answer a few questions for us via email. [READ MORE]