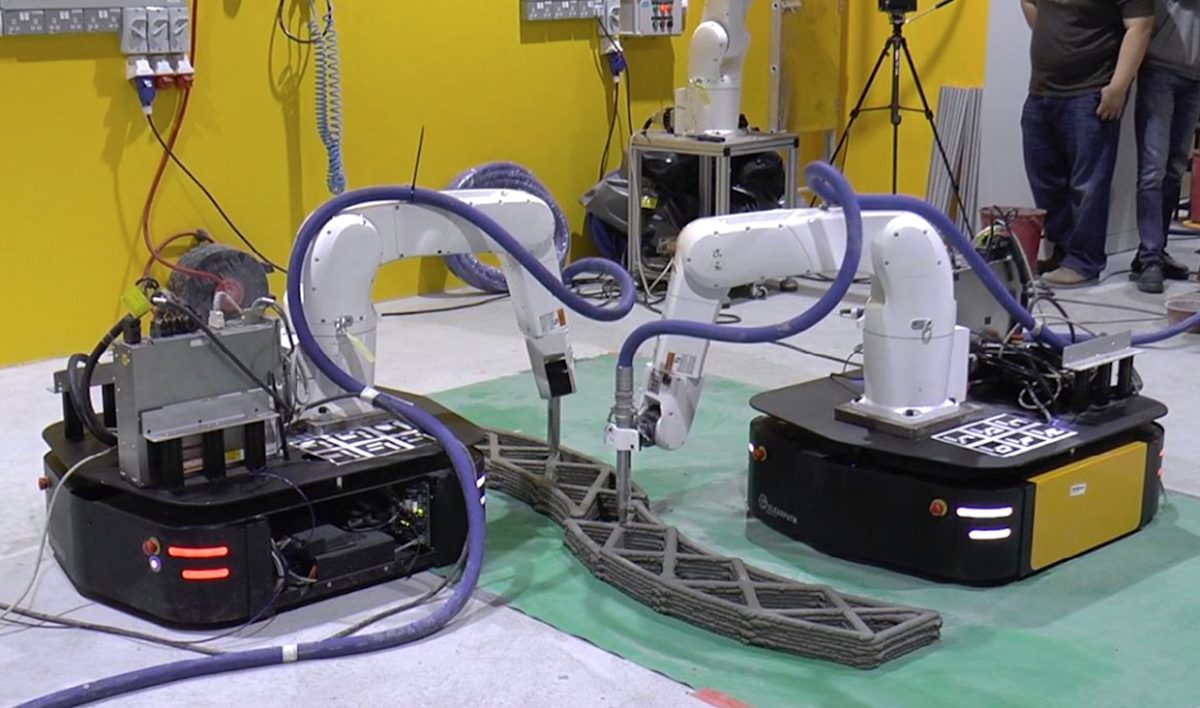 What’s possible with 3D printing is largely driven by two things: How patient you are, since printing large or complex structures can take a while, and what kind of build volume you have to work with. Most 3D printers are boxes, and inside those boxes are smaller boxes, and inside those boxes are the area in which a thing can be printed. If your thing is larger than that box, you’ve either got to print it in pieces that can be assembled later, buy yourself a new printer, or give up entirely.

You can certainly 3D print very large things, but there are still usually build volume constraints. We’ve seen examples of robot arms that can print anywhere they can reach, as well as gantry systems that can print structures like houses, as long as the structures are slightly smaller than they are. The way to avoid constraints like these is to have a robot that can both 3D print things and move around, and once you’ve decided to go that route, there’s no reason not to use multiple robots to speed things along. Roboticists at Nanyang Technological University in Singapore have, for the first time (as far as they know), performed “the actual printing of a single-piece concrete structure by two mobile robots operating concurrently.”

The big advantage of this system is that you can use it to build structures that are more or less arbitrary in size without having to change the system all that much, since the robots themselves can define their own build volume by moving around. These are robot arms on mobile bases, of course, not drones, so there are still restrictions on how high they can reach, but they still have way more flexibility than other systems when it comes to length and width. They can also potentially be much more efficient, since you can throw a bunch of robots at a big project, with each one tackling a different piece at the same time. Besides improving the overall speed of the print, having multiple robots also means that you can make stronger, more complex structures, since you don’t run into the problem of trying to bond wet concrete to dry concrete where two parts intersect.

As you may have noticed from the video, however, what we’re looking at right now is a very early proof of concept. The two robots do collaborate on printing a single structure, but they don’t move around while printing. They’re also being guided by an camera array, and they’re not really designed to be used outdoors, where presumably you’d need to be to usefully print large structures. [READ MORE]