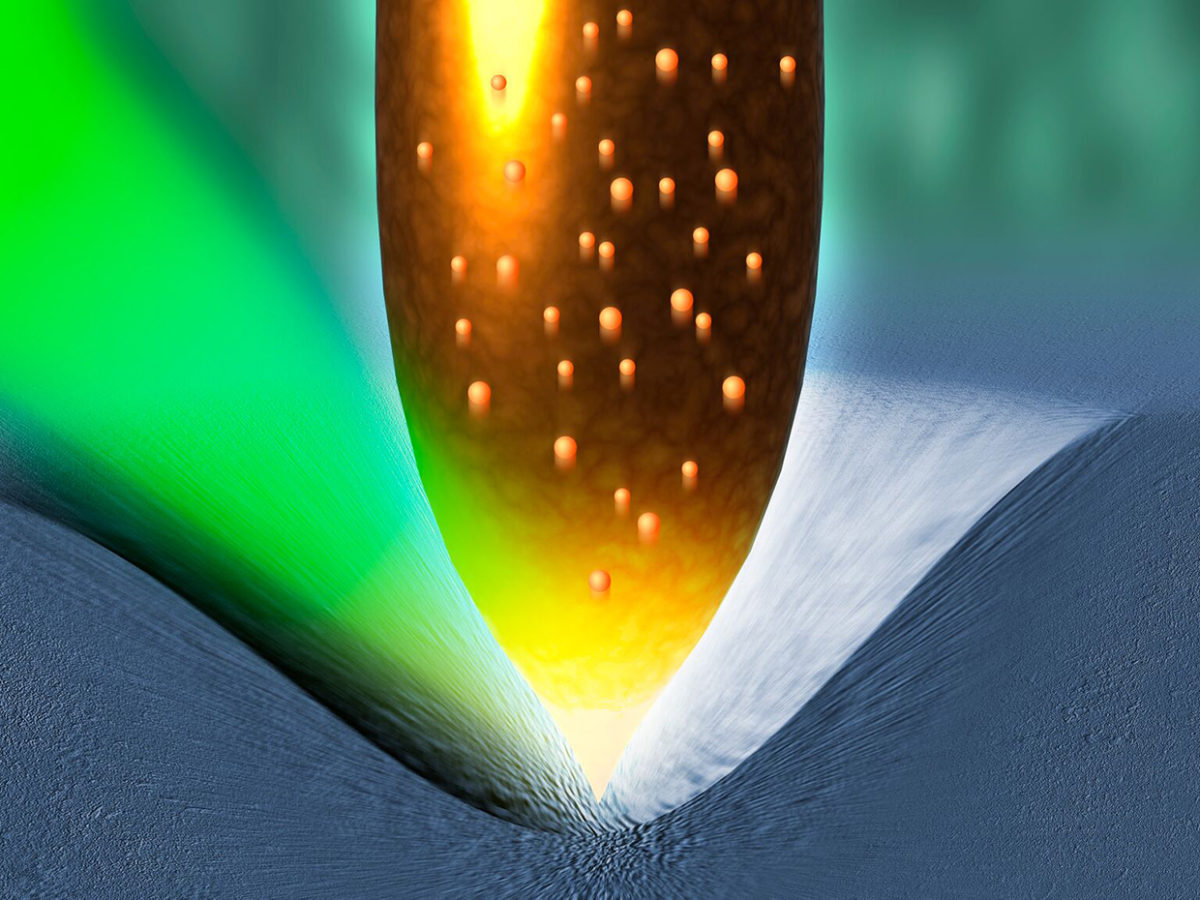 Scientists at the University of Warwick report that they’ve discovered a new kind of photovoltaic effect. What they dub “flexo-photovoltaics” is really the realization that ordinary crystals—including silicon—and other materials can be made to exhibit a long-known but underutilized type of energy conversion. The key is to poke the material—hard—and with something sharp.

Today’s solar cells are typically made from silicon, into which a built-in electric field has been engineered. That field comes from a p-n junction, the spot where a region with excess positive charge carriers (holes) meets a region with excess negative charge carriers (electrons). When a photon is absorbed, it becomes an electron and a hole. Because of the p–n junction, the pair is naturally separated to produce a voltage. Such solar cells have an inherent ceiling to the efficiency they can possibly reach. Called the Shockley-Queisser limit, it slams the door on efficiencies higher than 33.7 percent.

But a different effect has no such limit. Called the bulk photovoltaic effect, it occurs in only materials whose crystal structure lacks what’s called centrosymmetry, explains Marin Alexe, the physics professor who led the research at Warwick in the U.K. Having centrosymmetry means that you can rotate a crystal’s unit structure around the center and wind up with the same structure. Materials that lack centrosymmetry, such as barium titanate, can display the bulk photovoltaic effect—you can get some current out despite the lack of a p-n junction—but they don’t make good solar cells for other reasons.

Alexe, along with his student Ming-Min Yang and postdoctoral researcher Dong Jik Kim, set out to see if they could cause a centrosymmetric material that’s pretty good as a solar cell—silicon, for example—to exhibit bulk photovoltaic effect.

They did this through the microscopic version of brute force: They mashed an atomic-force-microscope tip into the crystal. The result was a strain in the crystal so severe that it was no longer centrosymmetric, and “that automatically kicks in the alternative photovoltaic effect,” says Alexe. The effect should work in many types of crystal; they tested strontium titanate, titanium oxide, and silicon. And even better: “This effect has no thermodynamic limits, because it’s not p-n junction–based,” he says.

But was it more efficient than an ordinary solar cell? “We cannot say anything about efficiency,” says Alexe. Those experiments will have to come once they’ve more fully characterized the effect. “What we can actually say is that nothing prevents us, principally, to use both effects in the same device.”

Alexe imagines an array of microspikes pressed atop a conventional silicon solar cell. “That’s the easiest way; not necessarily cheapest way or smartest way,” says Alexe. Another solution might be to engineer strain-inducing defects into the silicon. (The type of engineered strain used to speed transistors in microprocessors doesn’t work for this effect.) “This is a completely new range of research, which can be opened—engineering this type of effect,” he says.