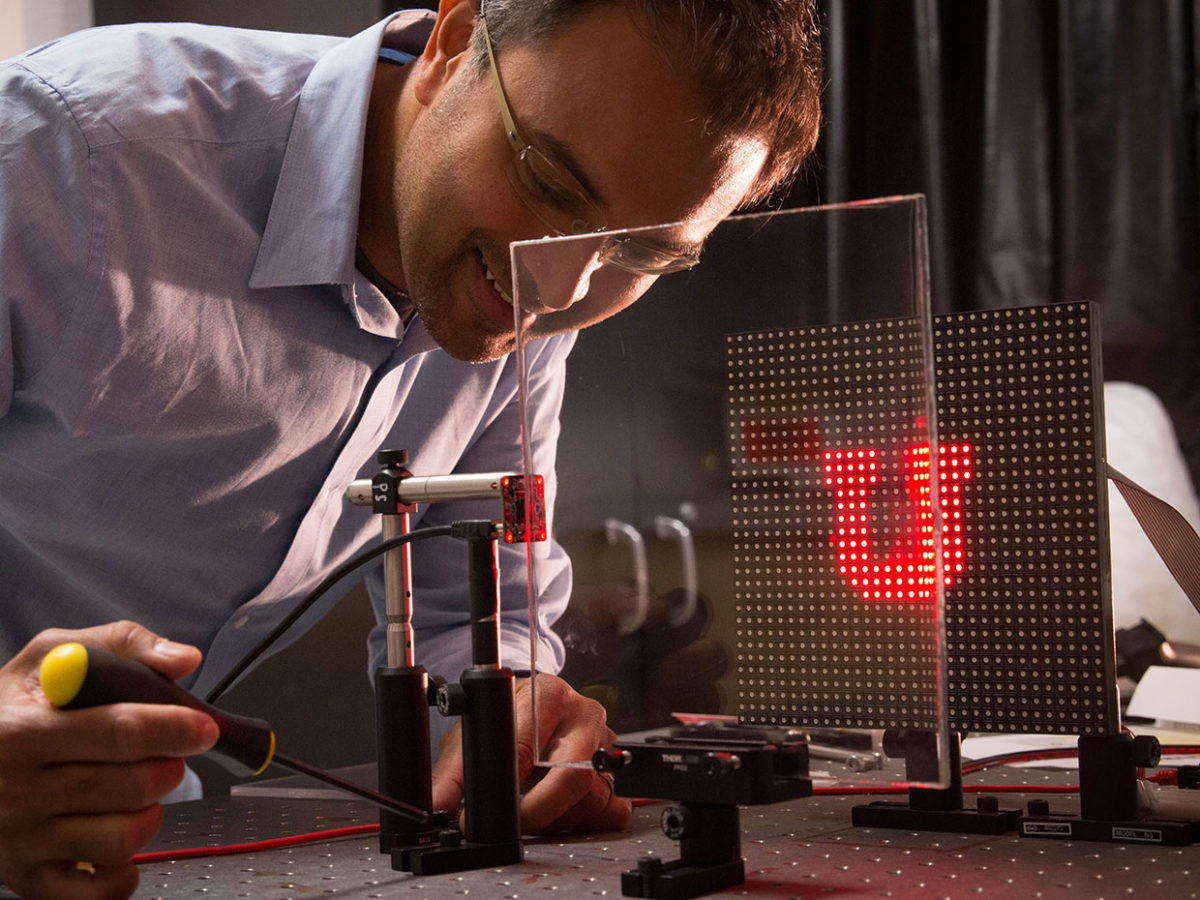 Engineers have developed a “see-through” camera from a pane of glass, a photodetector, and some really clever software

Cameras used to be their own devices with lenses and film and trips to the drug store to get the pictures developed. Then, they disappeared into phones, tablets, laptops, and video game consoles. Now, it appears that cameras could someday become as inconspicuous as a pane of glass.

According to new research, a photodetector pressed up against the edge of a window can detect the reflections that bounce around inside the glass—like light signals traversing a fiber optic cable. And some clever processing of those tiny trickles of detected light enables the pane of glass to act like a giant camera lens.

The resulting grainy images (think of pixelated, somewhat distorted and lower-resolution cousins to shots taken by first-generation smartphones) won’t compete anytime soon with conventional cameras for picture quality. But for the purposes of many computer vision programs, a window pane or a piece of car windshield may provide all the resolution that an image processing algorithm or neural network might need.

A fair number of images captured by cameras today are never seen by the human eye, says Rajesh Menon, associate professor of electrical and computer engineering at the University of Utah. They’re seen only by algorithms processing security camera feeds or videos from a factory floor, or autonomous vehicle image sensors. And the number of images never seen by humans is increasing.

So, Menon asks, “If machines are going to be seeing these images and video more than humans, then why don’t we think about redesigning the cameras purely for machines? Take the human out of the loop entirely, and think of cameras purely from a non-human perspective.”

In other words, computer vision algorithms don’t always need the high resolutions and image fidelity that a discerning human eye demands. Plenty of information might still be extracted (at lower cost and with a smaller gadget footprint) from the lower-quality images taken by Menon and his co-author Ganghun Kim’s “see-through lens-less camera.”

Menon and Kim’s technology, for which they’ve already applied for a patent on behalf of the university, begins with a pane of glass or plastic. Nothing special is required for the visual medium itself, Menon says. They used a sheet of plexiglass because it was easy to work with and cut.

They attached an off-the-shelf photodetector (640 by 480 pixels offering 8 bit resolution) to an edge of the plastic sheet that they’d smoothed and prepared to interface with the imaging device. They, the put reflective tape around the rest of the perimeter of the pane of plexiglass. They can do the imaging without the tape, Menon says, but this trick boosts the signal-to-noise ratio.

They kept their field of view simple for this proof-of-concept implementation. The object they set in front of the pane was an array of 32 by 32 LED lights. Then, they looked at the signal arriving at the photodetector when each of the 1,024 lights was individually illuminated.

So any arbitrary image from the LED array would, at least in a first approximation, just be a linear combination of the signals from each of the individual LED lights that had been illuminated.