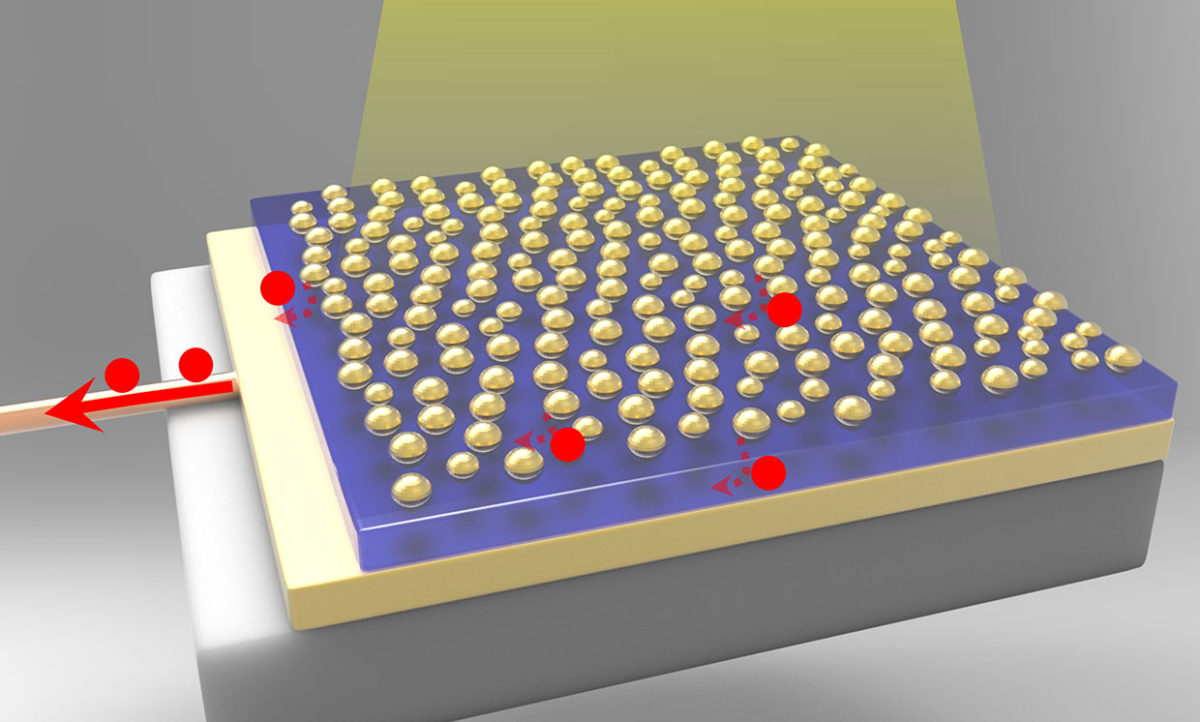 There is perhaps no more hotly pursued area in alternative energy than artificial photosynthesis, with research papers jumping from 11,000 in 2010 to 21,500 in 2017, according to some estimates. Artificial photosynthesis is used to either split water molecules into hydrogen and oxygen or reduce carbon dioxide. Last year, we visited the U.S. Department of Energy’s  Joint Center for Artificial Photosynthesis (JCAP)—one of the leading labs in the world in this field. We saw that water-splitting research had reached a level of success that made the researchers look to the new challenge of carbon dioxide reduction.

In a significant development to this line of research, scientists in Japan have developed a photoelectrode using a titanium dioxide semiconductor layered between a gold film and gold nanoparticles. The device manages to absorb 85 percent of all visible light. In addition, the novel electrode’s photon-to-current conversion efficiency was 11 times as great as that of a device that did not use a gold nanofilm. The upshot: It could yield an extraordinarily efficient means for converting sunlight into renewable energy.

In research described in the journal Nature Nanotechnology, researchers at Hokkaido University in Sapporo, Japan, in collaboration with researchers at National Chiao Tung University, in Taiwan, found that simply adding gold nanoparticles on top of a semiconductor like titanium dioxide did not provide the amount of light absorption they were looking to achieve for their new electrode.

The addition of the gold film was critical for creating the nanocavity. But the gold nanoparticles’ use of plasmonics, which exploits the waves of electrons that develop when photons strike a metal surface, was also invaluable.

When the surface plasmons, generated by the light hitting the gold nanoparticles, resonate at the same wavelength as the nanocavity, a strong coupling between the plasmons and the cavity occurs, leading to the high efficiency in converting light into current.

Hiroaki Misawa, the professor at Hokkaido University who led the research, concedes that it is difficult to translate the photoelectrode’s efficiency into straight-up comparisons with other water splitting systems.

“In this case, apparent absorption is increased if a lot of semiconductor particles are prepared in the system,” said Misawa. “On the other hand, a water splitting system using silicon solar cells has also been developed in which all visible light can be employed for the water splitting. Therefore, it is difficult to compare with certainty. Most importantly, in this study, it is possible to harvest 85 percent of visible light even with a metal oxide semiconductor electrode only 30-nm thick—a very small amount of materials.”

In future research, Misawa and his team will be exploring the mechanism of strong-coupling-enhanced, plasmon-induced charge formation and separation. They also intend to expand the application of the photoelectrode they developed to the other light-energy conversions, such as ammonia photosynthesis and solid-state solar cells. [READ MORE]