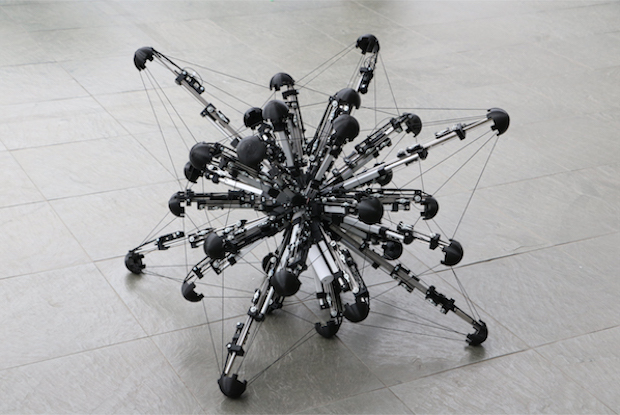 By Evan Ackerman
Making a one-legged robot that moves is very hard. Two-legged robots are a little bit more straightforward in some ways, and four-legged robots are statically stable much of the time. You can see where this is going—there’s a general trend toward more legs being more stable and potentially easier to control, especially as terrain complexity increases. So what happens if you take that logic to an extreme? As it turns out, you end up with a spherical robot made of 32 individually actuated telescoping legs, named Mochibot.

Mochibot’s shape is based on a rhombic triacontahedron, which is a polyhedron with 32 vertices and 30 faces made of rhombuses (or rhombi). The ideal shape for an omnidirectional robot would be a sphere, of course, but spheres are unstable because of their single point of contact with the ground. Mochibot is instead just mostly a sphere, and its deformability means that it can adjust how much ground contact it has to either move around or rest in one place. To move, it retracts arms in the direction of motion while extending arms on the other side, and to stop, it flattens itself out parallel to the ground.

The deformability comes from the individually telescoping legs. Each leg is made of three sliding rails (which behave like linear actuators), that can extend to just over half a meter in length or contract to less than a quarter meter. In practice, the legs don’t extend quite this far, and Mochibot’s maximum diameter is about a meter, while its minimum diameter is half a meter. It weighs 10 kilograms, including the batteries, and while it doesn’t have much in the way of useful payload at the moment, there’s plenty of room inside, and a variety of cameras, sensors, or sampling devices could be integrated into the arms.

If Mochibot looks vaguely familiar to you, it’s probably because it’s somewhat similar to one of the tensegrity robots that NASA has been working on for a while. Mochibot isn’t squishy in the same way that a tensegrity robot is (NASA’s robot can survive being thrown from a roof), and it’s not as deformable, but its advantage is that it can make itself significantly more spherical. Tensegrity robots locomote by essentially flopping over themselves in a series of motions so complex that it’s taken machine-learning algorithms to figure out how to get them to move efficiently, meaning that it’s quite difficult to steer them to a particular point (which is what a planetary exploration robot would be required to do).

Mochibot’s big advantage over a tensegrity robot is that it can move smoothly and continuously in any direction you like by altering its shape. This gives it an advantage over wheeled exploration robots as well, since all directions can be optimal for movement, rather than just forward and backward. The designers also suggest that Mochibot is better at dealing with deformable terrain like sand or loose rock, because its method of rolling locomotion is much less traction dependent. And if something does go wrong with one of the legs, well, you’ve got 31 others backing you up, so no big deal.

For applications like planetary exploration or disaster response, Mochibot has the potential to be a versatile platform. It’s highly mobile, very redundant, and looks like it could manage a hefty science payload. The next step is to experiment with different kinds of terrain, making sure that Mochibot can roll itself up and down slopes and over rocks and gullies without any problems. [READ MORE]