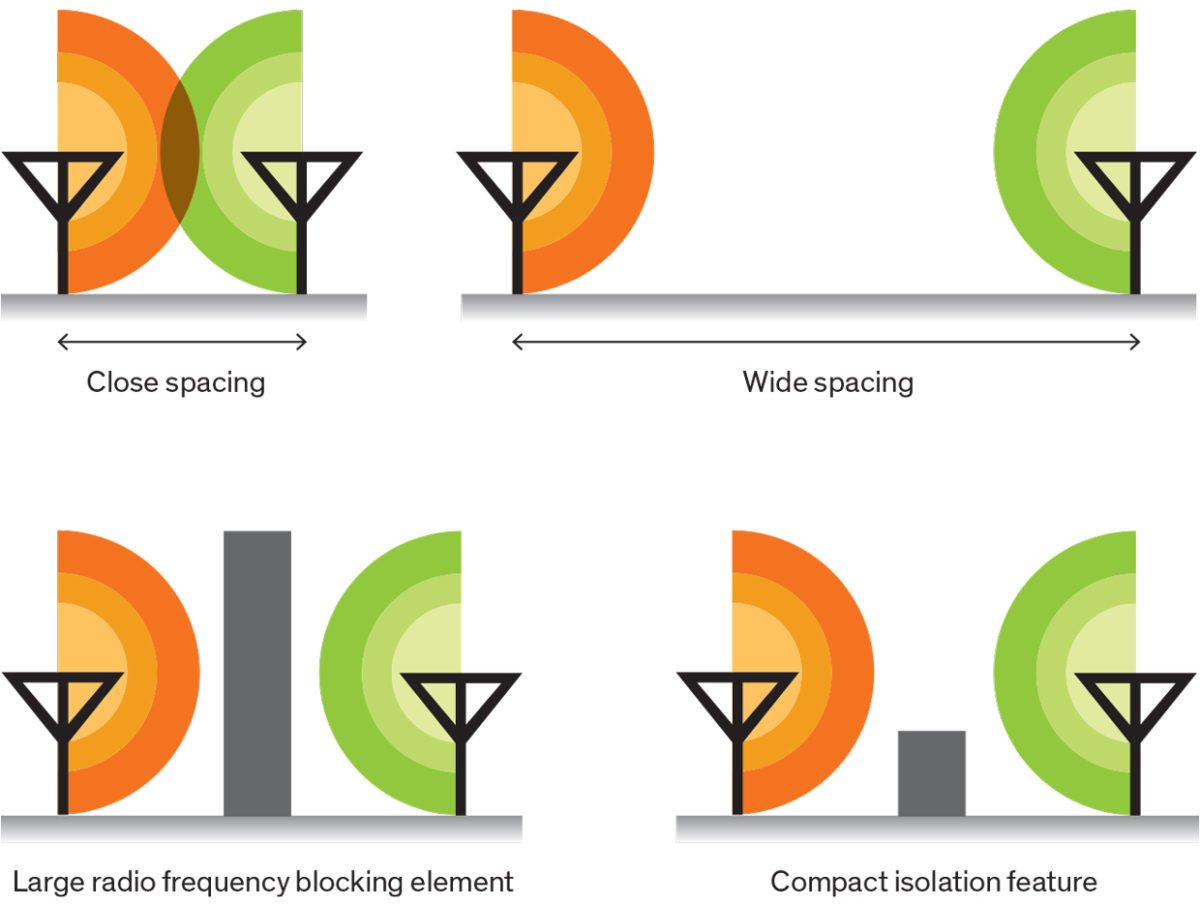 3D manufacturing can defeat the interference problem inside smart devices

By Sampson Hu and David Tanner

The problem has bedeviled designers for decades: How do you squeeze more and more antennas into smaller and smaller mobile devices?

It’s tempting to think that the answer is simply to use smaller antennas or to pack them closer together, but there are fundamental constraints on antenna size and placement. Antennas emit energy in the form of electromagnetic waves, and they do so in many directions. With one antenna, all’s well. But put another antenna next to it and that second one can be swamped by the strong signal coming from the first, making it deaf to the weaker signal it should be receiving.

Two antennas are bad enough. But these days, a typical smart device can have many more. Their ranks usually include one or two antennas for Wi-Fi, one for Bluetooth, one for GPS, and two or four for 4G LTE cellular communications.

This multiplicity of LTE antennas is the norm because it enables the phones to avoid dropouts—including those that occur when your hand obscures one antenna, which can be particularly frustrating during a conversation. Having multiple antennas for the same communications link also allows cellphone carriers to combine multiple streams for improved data transfer rates. And in the near future, 5G communications will add more complexity to the mix, by extending the frequency bands used for cellular below 6 gigahertz, making existing antennas work harder, and by requiring antennas that operate at the 28- and 37-GHz bands.

Device designers have to assume that all the antennas in this gaggle will be operating at the same time. After all, it’s not unusual for a device to be running apps that rely on GPS and Bluetooth while, say, streaming a video over Wi-Fi or the cellular network. Chipset manufacturers have been working to combine functions, such as using one antenna for both Wi-Fi and Bluetooth. Designing two systems to cooperate like this is helpful, but it only chips away at the problem.

So you’ve got a small physical space and lots of antennas that need to operate simultaneously without interfering with one another. Designers have tried to solve this problem by making antennas smaller and more directional. They’ve also endeavored to isolate the antennas more effectively, but that’s tricky given the small amount of real estate there is to work with.

The only sensible solution is a new approach to antenna design. Instead of creating antennas as individual elements and leaving it to the designers to choose where to fit them into a device, it’s better to design a suite of antennas that work well together as a system and then install that system into the mobile device as a single cohesive unit. [READ MORE]