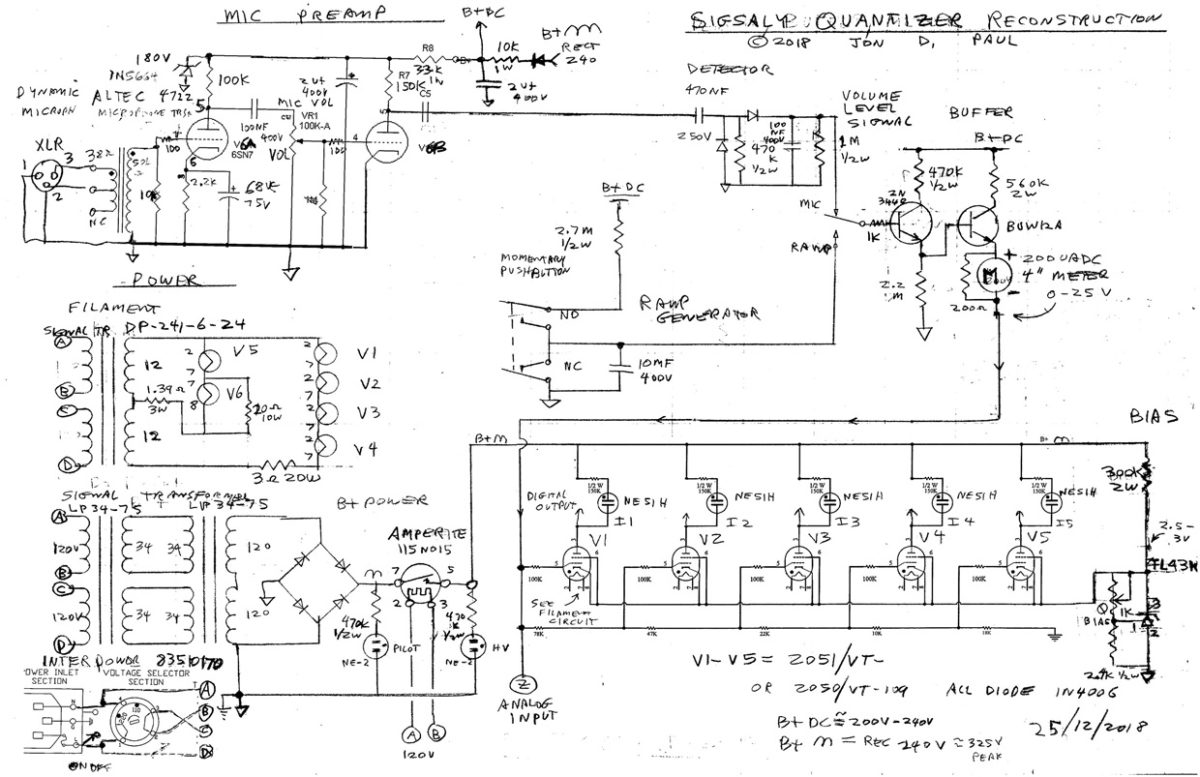 Circuits that use tube electronics like thyratrons can be alien to engineers raised in the solid-state era. For example, these circuits require high voltages to operate, and power must be supplied to heat filaments. This complicates design, construction, and debugging. But if you want to understand how electrical engineers got it done before semiconductors became ubiquitous, then taking the plunge into the world of tubes can be very educational. This supplement to my February Hands On article contains additional information about how I re-created the SIGSALY analog-to-digital converter—and actually got it working.

The converter is built around five VT-109/2051 thyratrons. The VT-109/2051 is an industrial control argon tetrode, functionally equivalent to a silicon controlled rectifier. When the thyratron’s trigger voltage is applied to the anode, it “fires” and latches up until the anode voltage is removed.

In the SIGSALY quantizer, a pulsed anode voltage is applied, and so the five thyratrons serve as strobed comparators. The analog input voltage is fed into a five-tap logarithmic resistor divider, whose taps drive the thyratron grids. As the input voltage increases, the five thyratrons trigger in sequence (not binary, but a “thermometer code”). In the SIGSALY quantizers, the thyratron anode currents were summed to form a six-level quantized output voltage (zero, plus each of the five levels detected by the comparator). In the original SIGSALY design, the high-tension (B+) anode supply was a 350-volt, 20-millisecond-long pulse, used to sample the input and then to reset the thyratrons.

My reconstruction uses the same five-tap logarithmic ladder and thyratrons as in the original SIGSALY quantizer, with a full-scale input of 25-V and 1.0-V tap voltages. It differs a little in that instead of a 350-V, 20-ms B+ pulse, the input is sampled by supplying full-wave rectified 240-V AC power to the anode circuit, which resets the thyratrons at the power line zero-voltage crossings, every 8.33 or 10 ms.

Setting the thyratron’s cathode bias voltage correctly was critical, but the VT-109’s specifications indicated a wide range. So I did some experimenting, using a string of diodes in series with the cathodes to set the bias voltage, which showed that a bias of 2.5 to 3.0 V was optimum. However, I also discovered that the diode string bias voltage varied with the total thyratron current and was only coarsely adjustable in 0.6 V increments. I replaced the diodes with a Texas Instruments TL-431 C shunt regulator [PDF] to supply a finely adjustable, highly regulated cathode bias voltage.

The complete re-creation includes the power supply circuitry, a microphone preamplifier, a 10-second ramp generator as an alternate input signal source, and a meter display for comparing the input to the converter’s output, as indicated by a set of five neon lamps. I scrounged a 120/240-V to 24-V transformer, so the 6.3-V supply that heats the tube filaments were wired in series. To prevent cold cathode “sputtering” damage, the thyratron filaments must be preheated before applying the B+ anode voltage. I use an Amperite thermal time-delay relay (115NO15),which switches the B+ on after a warm-up delay of 15 seconds.

The dynamic microphone is coupled with a vintage Altec-Lansing 4722 transformer to a 6SL7GT dual triode, which amplifies the signal by 60 decibels in two stages. The preamp output is AC coupled, diode detected, and buffered. This signal is then fed to the large panel meter for analog indication, and also drives the quantizer input. Alternately, a push button starts a signal ramp generator by charging a 10-microfarad plastic capacitor from B+ via a 2.7-megaohm resistor. [READ MORE]