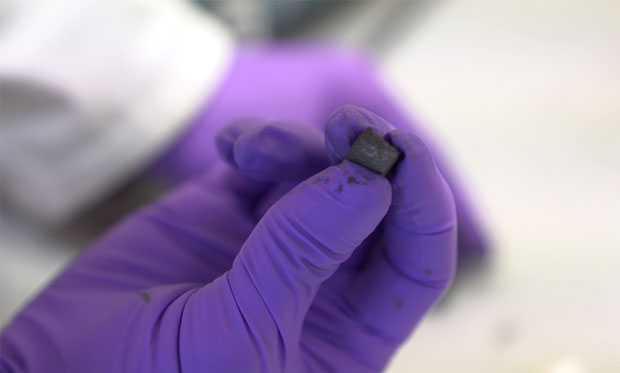 By Tracy StaedterFrom his office at Swansea University in the United Kingdom, associate professor Matthew Carnie has a good view of Tata Steel’s furnace stacks. To some, those chimneys rising over Port Talbot are unsightly. To Carnie, they’re an opportunity. They emit a good portion of the plant’s waste heat, which overall has the same power output as some nuclear plants, says Carnie—around 1,300 megawatts, according to his calculations.

With that much potential power waiting to be captured, Carnie and his research team have developed a hybrid, 3D-printed semiconductor material that converts waste heat into electricity. It’s 50 percent more efficient than another inexpensive semiconductor material, lead telluride, that’s screen-printed, and the new material could be assembled cheaply into a device that converts up to 10 percent of heat wherever it’s applied.

“Ideally, they could be deployed in areas where there is high-grade waste heat and be used to generate power to help with energy efficiency,” says Carnie. With one-sixth of all energy used by industry in the United Kingdom pouring into the atmosphere as waste heat, the possibilities are big, he says.

Carnie, who has expertise in printed photovoltaics, lately has been exploring the field of thermoelectrics. Here, materials like semiconductors and electrical conductors produce a voltage when hot electrons flow from one kind of heated material to another, relatively cooler kind. To date, the most efficient semiconductor material available is tin selenide, made from tin and selenium. Although it holds the record for efficiency of waste-heat conversion, it hasn’t been made into a commercial device.

To work with it, Carnie would need the appropriate rigs—ones that could sinter materials with plasma or press them at high pressures and temperatures in excess of several hundred degrees Celsius. Those machines were not in his department’s budget.

Carnie wondered if he could transfer some of what he knew from printing photovoltaic materials to thermoelectrics. He asked team member and postdoctoral researcher, Matthew Burton, if they could turn tin selenide into an ink. No one had done that before, and Burton was skeptical. But he made it happen by mixing tin and selenium powder with organic binders and water.

Burton then poured the ink into tiny cube-shaped molds about 10 millimeters on each side and dried them in an oven at 120 degrees Celsius. Lastly, he baked the cubeoids at more than 800 degrees K to burn off the organic binders.

Efficiency measurements from the first results were promising, says Carnie. In the field of thermoelectric devices, efficiency is measured by a “figure of merit” number, known as ZT. Anything above 1 ZT is considered very promising. Burton’s first cubes tested at around .5 ZT. After tweaking the amount of binder and the ratios of tin to selenium, Burton was able to achieve 1.7 ZT.

“That is a record for thermoelectric material made in this fashion,” says Carnie.

Far more research is needed, says Carnie. For starters, they’ve made just one of the two different semiconductor materials needed—the type that holds the hot electrons. They still need to make the “cooler” side, where the electrons flow to. But this fall, Tata Steel is sponsoring a PhD student to help develop the second part, and eventually both materials will be sandwiched between slices of ceramic to make a thermoelectric device.

Whether the steel plant eventually adopts such a system will depend on cost, says Carnie. But he’s hopeful. Room-temperature ink is cheap to mix up and if they can move the ink to a nozzle-based system and print it with continuous manufacturing methods, it would be a dramatic improvement, he says. [READ MORE]