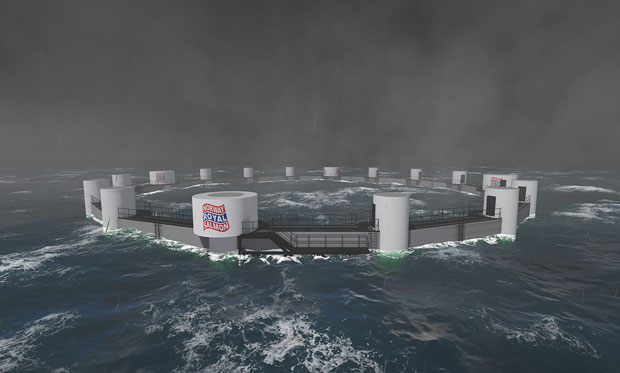 Giant, instrumented pens will monitor the health of millions of fish and feed them automatically

Tucked within Norway’s fjord-riddled coast, nearly 3,500 fish pens corral upwards of 400 million salmon and trout. Not only does the country raise and ship more salmonoid overseas than any other in the world (1.1 million tons in 2018), farmed salmon is Norway’s third largest export behind crude petroleum and natural gas. In a global industry expected to quintuple by 2050, farmed salmon is a fine kettle of fish.

But raising salmon is not without its challenges. Feeding them makes up half of all operational costs. Parasitic crustaceans called sea lice (Lepeophtheirus salmonis) make easy meals of captive fish, attaching to their bodies by suction and grazing on skin, blood and mucus. If they don’t kill the fish, some delousing methods, such as flushing fish with water, might. About 15 percent of farmed salmon die in traditional fish pens and sea lice cost the salmon industry several billion dollars annually, according to Norway Royal Salmon.

A new remote-controlled fish pen—the first of its kind designed for the tempestuous waters of the open ocean—could help Norway meet the growing demand for salmon and at the same time reduce the cost of feed and mortalities that result from sea lice.

Instrumented with wireless gauges, sensors and cameras, the sea pen will give workers onboard a nearby barge the ability to monitor the fish, automatic feeders, and a remotely operated net cleaner as well as environmental and meteorological conditions, such as water depth, turbidity, salinity, oxygen, temperature, echo locators, and pH levels. The underwater feeding system reduces the energy cost of feeding by 50 percent. And because these open ocean pens will keep salmon 10-40 meters beneath the surface, below the sunlit zone where sea lice and algae thrive, they could reduce or eliminate the need for delousing operations, significantly lowering mortality rates.

Initial testing of the first pen will happen in 2020 off the coast of Troms, near a small island that will help dampen the rough waves. After seeing positive results from field trials, the pens could be moved further out to sea.

The system, developed by Arctic Offshore Farming (owned by Norway Royal Salmon), is a cylindrical fish pen with an outside diameter of 79 meters. Resembling a giant fish basket, the structure has a top and a bottom section, 10 meters apart. Each has a buoyant pontoon ring, supported by 16 columns. When submerged, only the upper pontoon is visible on the ocean surface. The salmon live in the bottom section, in a large net that drapes to a depth of 40 meters from the lower pontoon. A roof net prevents the fish from swimming into the top section and can be removed to either add fish or harvest them. [READ MORE]