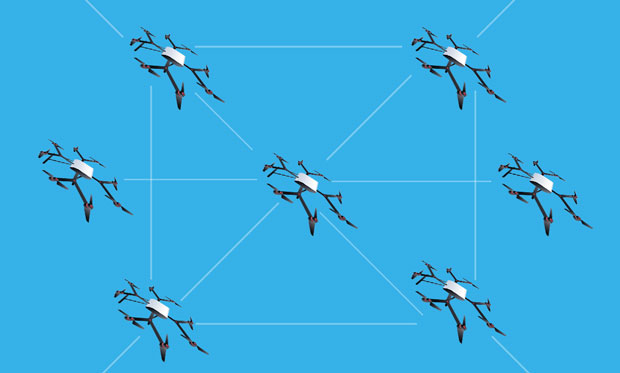 Quantum drones under development in China could lead to nigh unhackable airborne quantum communication networks, a new study finds.

Quantum mechanics makes possible a strange phenomenon known as entanglement. Essentially, two or more particles such as photons that get linked or “entangled” can, in theory, influence each other no matter the distance between them. Entanglement is essential to the workings of quantum computers, the networks that would connect them, and the most sophisticated kinds of quantum cryptography—a  means of information exchange that is impervious to hacking.

A key problem with developing ground-based quantum networks is how fragile entanglement is; when sending photons over existing fiber-optic networks, this limits transmission distance and data rates. With that in mind, scientists have, in recent years, increasingly investigated quantum networks involving photons transmitted over open air.

Scientists in China and Europe are currently developing satellite-based quantum networks, enabling long-distance satellite-to-ground links. However, quantum satellites have a number of drawbacks. Among these: Satellites in low orbit can communicate with certain ground locations only within limited windows of time; and the costs of space launch makes setting up a quantum satellite network quite expensive.

Scientists at Nanjing University in China, noting the recent explosive advances in drone technology, have designed a “quantum drone” to serve as an airborne node in a quantum network. The researchers detailed their findings on 23 May in the ArXiV online preprint server.

“They have built the first quantum drone and used it as a node in a similar way as quantum satellites are used,” says quantum scientist Dmytro Vasylyev at the University of Rostock in Germany, who did not take part in this research.

The Chinese researchers developed an eight-rotor octocopter drone whose 35-kilogram weight at takeoff includes its onboard quantum communication system. In experiments, the researchers demonstrated that their quantum drone can operate while hovering in midair for 40 minutes at a time. It is capable of maintaining two air-to-ground links, each roughly 100 meters long, and can receive and transmit entangled photons during the daytime, on a clear night, and even on a rainy night.

The scientists are confident that they can scale down their quantum communication system to fit aboard small consumer drones for on-demand local-area quantum networks. They could also scale it up for loading onto high-altitude drones that would be nodes in wide-area networks spanning hundreds of kilometers. All in all, they envision quantum drone networks filling a key niche between satellite and ground-based quantum networks.

Vasylyev notes that fielding a communications network featuring quantum drones could be stymied by a number of challenges. For example, he suggests that although the system takes into account that many entangled photons are expected to get scattered, absorbed, or otherwise lost on their way to and from the drone, the quantum communications systems on the flying robot may potentially mistake stray photons from, say, the sun as some of these lost entangled photons. Such mistakes could endanger the security of the system by making its users overly confident in how well it works, he says.

In addition, “Drones fly in the lower atmosphere, where atmospheric turbulence is a significant source of signal degradation,” Vasylyev points out. Moreover, “The drone flight is, on its own, a great source of turbulent flow.” Such turbulence “could considerably degrade the performance of quantum communication.”

Drawbacks notwithstanding, says Vasylyev, quantum drones still offer clear advantages. They can serve as “a low-cost mobile alternative to a fiber-optic based network,” he notes, adding that they can also serve as testbeds to help researchers study the influence of weather conditions and other atmospheric effects on quantum communication. This will eventually yield better satellite-based quantum communication, he says. [READ MORE]