A Brief History of the Lie Detector 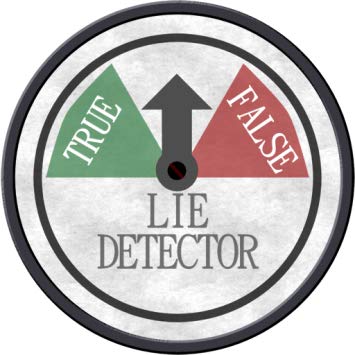 When Wonder Woman deftly ensnares someone in her golden lariat, she can compel that person to speak the absolute truth. It’s a handy tool for battling evil supervillains. Had the Lasso of Truth been an actual piece of technology, police detectives no doubt would be lining up to borrow it.

Indeed, for much of the past century, psychologists, crime experts, and others have searched in vain for an infallible lie detector. Some thought they’d discovered it in the polygraph machine. A medical device for recording a patient’s vital signs—pulse, blood pressure, temperature, breathing rate—the polygraph was designed to help diagnose cardiac anomalies and to monitor patients during surgery.

The polygraph was a concatenation of several instruments. One of the first was a 1906 device, invented by British cardiologist James Mackenzie, that measured the arterial and venous pulse and plotted them as continuous lines on paper. The Grass Instrument Co., of Massachusetts, maker of the 1960 polygraph machine pictured above, also sold equipment for monitoring EEGs, epilepsy, and sleep.

The leap from medical device to interrogation tool is a curious one, as historian Ken Alder describes in his 2007 book The Lie Detectors: The History of an American Obsession (Free Press). Well before the polygraph’s invention, scientists had tried to link vital signs with emotions. As early as 1858, French physiologist Étienne-Jules Marey recorded bodily changes as responses to uncomfortable stressors, including nausea and sharp noises. In the 1890s, Italian criminologist Cesare Lombroso used a specialized glove to measure a criminal suspect’s blood pressure during interrogation. Lombroso believed that criminals constituted a distinct, lower race, and his glove was one way he tried to verify that belief.

In the years leading up to World War I, Harvard psychologist Hugo Münsterberg used a variety of instruments, including the polygraph, to record and analyze subjective feelings. Münsterberg argued for the machine’s application to criminal law, seeing both scientific impartiality and conclusiveness.

As an undergraduate, William Moulton Marston worked in Münsterberg’s lab and was captivated by his vision. After receiving his B.A. in 1915, Marston decided to continue at Harvard, pursuing both a law degree and a Ph.D. in psychology, which he saw as complementary fields. He invented a systolic blood pressure cuff and with his wife, Elizabeth Holloway Marston, used the device to investigate the links between vital signs and emotions. In tests on fellow students, he reported a 96 percent success rate in detecting liars.

World War I proved to be a fine time to research the arts of deception. Robert Mearns Yerkes, who also earned a Ph.D. in psychology from Harvard and went on to develop intelligence tests for the U.S. Army, agreed to sponsor more rigorous tests of Marston’s research under the aegis of the National Research Council. In one test on 20 detainees in the Boston Municipal court, Marston claimed a 100 percent success rate in lie detection. But his high success rate made his supervisors suspicious. And his critics argued that interpreting polygraph results was more art than science. Many people, for instance, experience higher heart rate and blood pressure when they feel nervous or stressed, which may in turn affect their reaction to a lie detector test. Maybe they’re lying, but maybe they just don’t like being interrogated.

Marston (like Yerkes) was a racist. He claimed he could not be fully confident in the results on African Americans because he thought their minds were more primitive than those of whites. The war ended before Marston could convince other psychologists of the validity of the polygraph. [READ MORE]