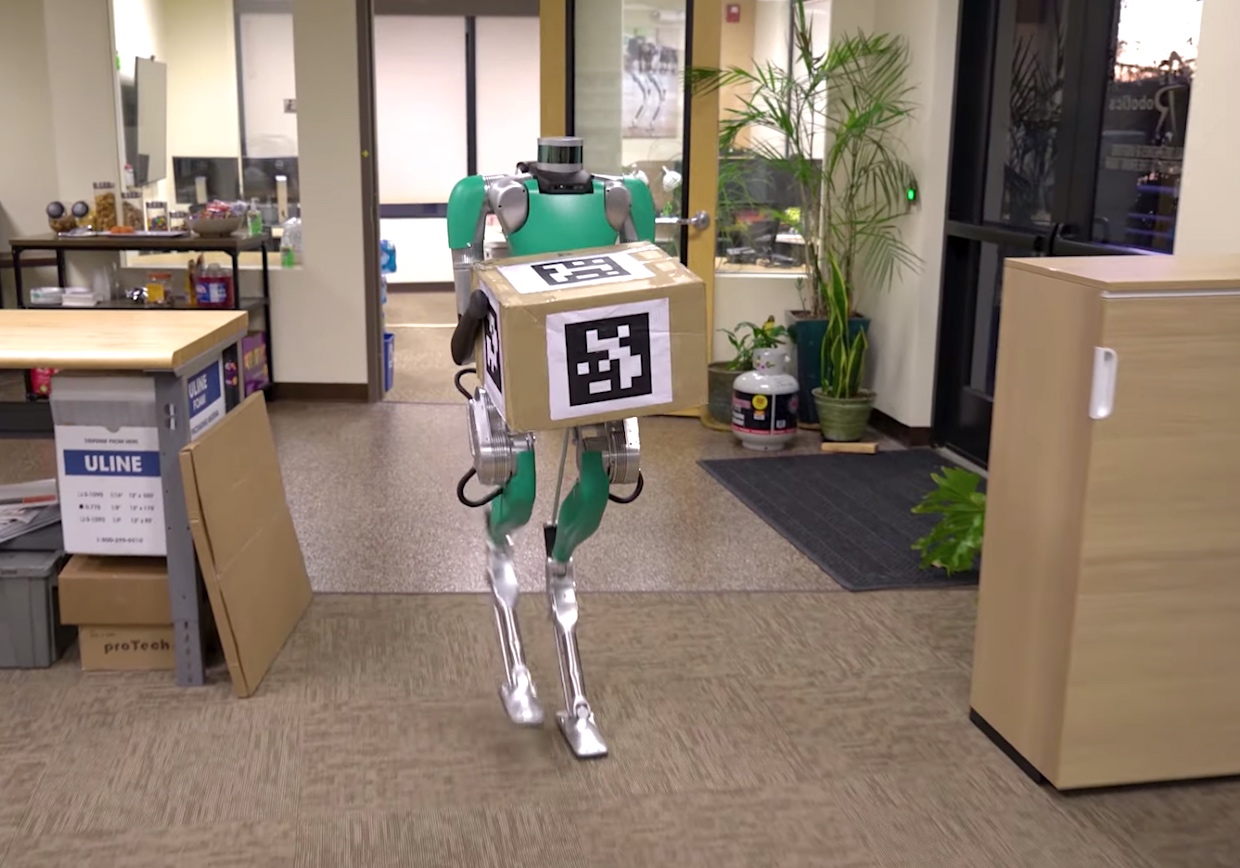 Last time we saw Agility Robotics’ Digit biped, it was picking up a box from a Ford delivery van and autonomously dropping it off on a porch, while at the same time managing to not trip over stairs, grass, or small children. As a demo, it was pretty impressive, but of course there’s an enormous gap between making a video of a robot doing a successful autonomous delivery and letting that robot out into the semi-structured world and expecting it to reliably do a good job.

Agility Robotics is aware of this, of course, and over the last six months they’ve been making substantial improvements to Digit to make it more capable and robust. A new video posted today shows what’s new with the latest version of Digit—Digit v2.

We appreciate Agility Robotics foregoing music in the video, which lets us hear exactly what Digit sounds like in operation. The most noticeable changes are in Digit’s feet, torso, and arms, and I was particularly impressed to see Digit reposition the box on the table before grasping it to make sure that it could get a good grip. Otherwise, it’s hard to tell what’s new, so we asked Agility Robotics’ CEO Damion Shelton to get us up to speed.

IEEE Spectrum: Can you summarize the differences between Digit v1 and v2? We’re particularly interested in the new feet.

Damion Shelton: The feet now include a roll degree of freedom, so that Digit can resist lateral forces without needing to side step. This allows Digit v2 to balance on one foot statically, which Digit v1 and Cassie could not do. The larger foot also dramatically decreases load per unit area, for improved performance on very soft surfaces like sand.

The torso changes are a bit more behind-the-scenes. All of the electronics in it are now fully custom, thermally managed, and environmentally sealed. We’ve also included power and ethernet to a payload bay that can fit either a NUC or Jetson module (or other customer payload).

What exactly are we seeing in the video in terms of Digit’s autonomous capabilities?

At the moment this is a demonstration of shared autonomy. Picking and placing the box is fully autonomous. Balance and footstep placement are fully autonomous, but guidance and obstacle avoidance are under local teleop. It’s no longer a radio controller as in early videos; we’re not ready to reveal our current controller design but it’s a reasonably significant upgrade. This is v2 hardware, so there’s one more full version in development prior to the 2020 launch, which will expand the autonomy envelope significantly. [READ MORE]