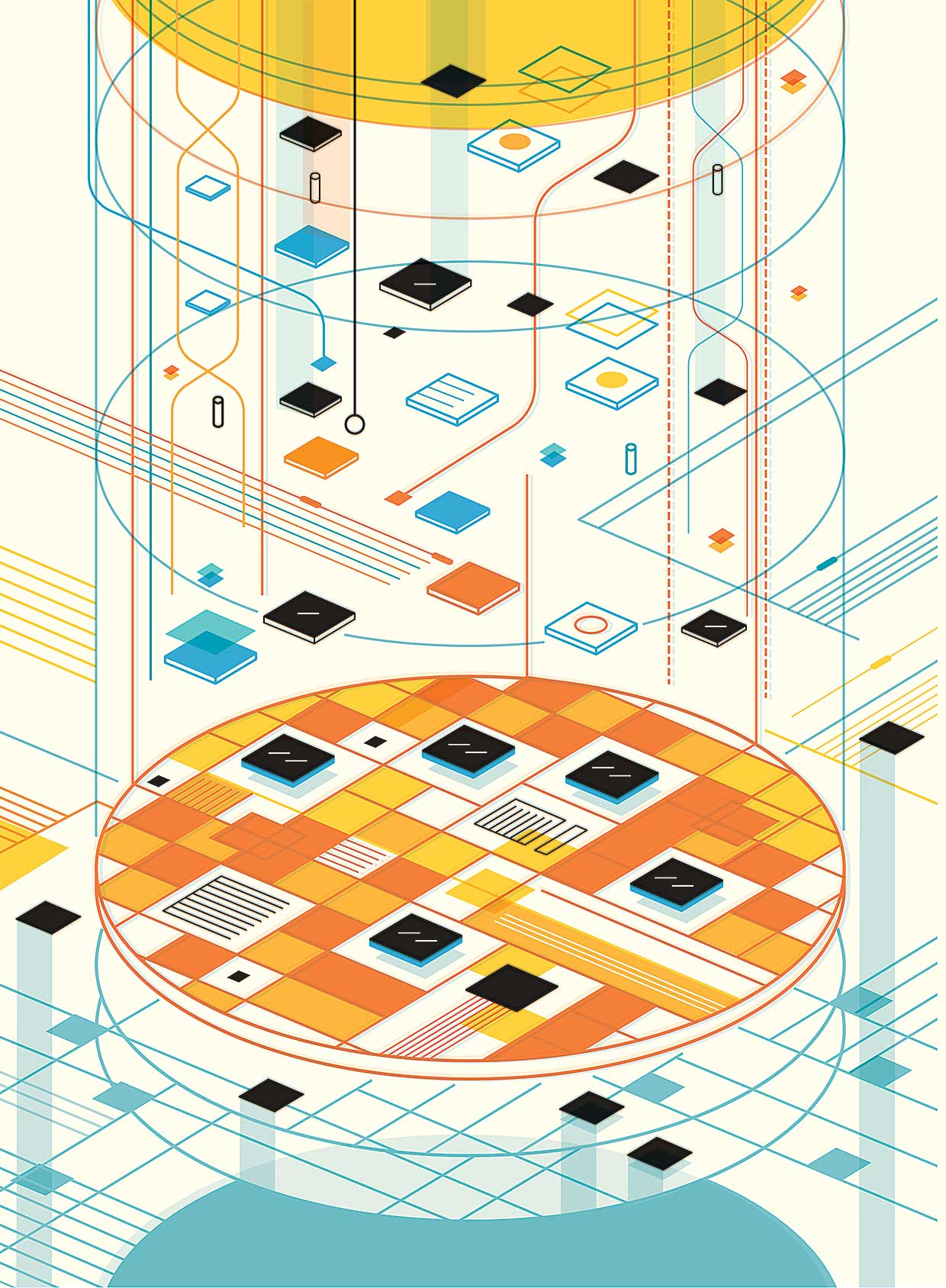 The need to make some hardware systems tinier and tinier and others bigger and bigger has been driving innovations in electronics for a long time. The former can be seen in the progression from laptops to smartphones to smart watches to hearables and other “invisible” electronics. The latter defines today’s commercial data centers—megawatt-devouring monsters that fill purpose-built warehouses around the world. Interestingly, the same technology is limiting progress in both arenas, though for different reasons.

The culprit, we contend, is the printed circuit board. And the solution is to get rid of it.

Our research shows that the printed circuit board could be replaced with the same material that makes up the chips that are attached to it, namely silicon. Such a move would lead to smaller, lighter-weight systems for wearables and other size-constrained gadgets, and also to incredibly powerful high-performance computers that would pack dozens of servers’ worth of computing capability onto a dinner-plate-size wafer of silicon.

This all-silicon technology, which we call silicon-interconnect fabric, allows bare chips to be connected directly to wiring on a separate piece of silicon. Unlike connections on a printed circuit board, the wiring between chips on our fabric is just as small as wiring within a chip. Many more chip-to-chip connections are thus possible, and those connections are able to transmit data faster while using less energy.

Silicon-interconnect fabric, or Si-IF, offers an added bonus. It’s an excellent path toward the dissolution of the f(relatively) big, complicated, and difficult-to-manufacture systems-on-chips that currently run everything from smartphones to supercomputers. In place of SoCs, system designers could use a conglomeration of smaller, simpler-to-design, and easier-to-manufacture chiplets tightly interconnected on an Si-IF. This chiplet revolution is already well under way, with AMD, Intel, Nvidia, and others offering chiplets assembled inside of advanced packages. Silicon-interconnect fabric expands that vision, breaking the system out of the package to include the entire computer.

To understand the value of eliminating the printed circuit board, consider what happens with a typical SoC. Thanks to Moore’s Law, a 1-square-centimeter piece of silicon can pack pretty much everything needed to drive a smartphone. Unfortunately, for a variety of reasons that mostly begin and end with the printed circuit board, this sliver of silicon is then put inside a (usually) plastic package that can be as much as 20 times as large as the chip itself.

The size difference between chip and package creates at least two problems. First, the volume and weight of the packaged chip are much greater than those of the original piece of silicon. Obviously, that’s a problem for all things that need to be small, thin, and light. Second, if the final hardware requires multiple chips that talk to one another (and most systems do), then the distance that signals need to travel increases by more than a factor of 10. That distance is a speed and energy bottleneck, especially if the chips exchange a lot of data. This choke point is perhaps the biggest problem for data-intensive applications such as graphics, machine learning, and search. To make matters worse, packaged chips are difficult to keep cool. Indeed, heat removal has been a limiting factor in computer systems for decades.

If these packages are such a problem, why not just remove them? Because of the printed circuit board.

The purpose of the printed circuit board is, of course, to connect chips, passive components, and other devices into a working system. But it’s not an ideal technology. PCBs are difficult to make perfectly flat and are prone to warpage. Chip packages usually connect to the PCB via a set of solder bumps, which are melted and resolidified during the manufacturing process. The limitations of solder technology combined with surface warpage mean these solder bumps can be no less than 0.5 millimeters apart. In other words, you can pack no more than 400 connections per square centimeter of chip area. For many applications, that’s far too few connections to deliver power to the chip and get signals in and out. For example, the small area taken up by one of the Intel Atom processor’s dies has only enough room for a hundred 0.5-mm connections, falling short of what it needs by 300. Designers use the chip package to make the connection-per-unit-area math work. The package takes tiny input/output connections on the silicon chip—ranging from 1 to 50 micrometers wide—and fans them out to the PCB’s 500-µm scale.

Recently, the semiconductor industry has tried to limit the problems of printed circuit boards by developing advanced packaging, such as silicon interposer technology. An interposer is a thin layer of silicon on which a small number of bare silicon chips are mounted and linked to each other with a larger number of connections than could be made between two packaged chips. But the interposer and its chips must still be packaged and mounted on a PCB, so this arrangement adds complexity without solving any of the other issues. Moreover, interposers are necessarily thin, fragile, and limited in size, which means it is difficult to construct large systems on them.

We believe that a better solution is to get rid of packages and PCBs altogether and instead bond the chips onto a relatively thick (500-µm to 1-mm) silicon wafer. Processors, memory dies, analog and RF chiplets, voltage-regulator modules, and even passive components such as inductors and capacitors can be bonded directly to the silicon. Compared with the usual PCB material—a fiberglass and epoxy composite called FR-4—a silicon wafer is rigid and can be polished to near perfect flatness, so warping is no longer an issue. What’s more, because the chips and the silicon substrate expand and contract at the same rate as they heat and cool, you no longer need a large, flexible link like a solder bump between the chip and the substrate.

Solder bumps can be replaced with micrometer-scale copper pillars built onto the silicon substrate. Using thermal compression—which basically is precisely applied heat and force—the chip’s copper I/O ports can then be directly bonded to the pillars. Careful optimization of the thermal-compression bonding can produce copper-to-copper bonds that are far more reliable than soldered bonds, with fewer materials involved.

Eliminating the PCB and its weaknesses means the chip’s I/O ports can be spaced as little as 10 µm apart instead of 500 µm. We can therefore pack 2,500 times as many I/O ports on the silicon die without needing the package as a space transformer.

Even better, we can leverage standard semiconductor manufacturing processes to make multiple layers of wiring on the Si-IF. These traces can be much finer than those on a printed circuit board. They can be less than 2 µm apart, compared with a PCB’s 500 µm. The technology can even achieve chip-to-chip spacing of less than 100 µm, compared with 1 mm or more using a PCB. The result is that an Si-IF system saves space and power and cuts down on the time it takes signals to reach their destinations.

Furthermore, unlike PCB and chip-package materials, silicon is a reasonably good conductor of heat. Heat sinks can be mounted on both sides of the Si-IF to extract more heat—our estimates suggest up to 70 percent more. Removing more heat lets processors run faster.

Although silicon has very good tensile strength and stiffness, it is somewhat brittle. Fortunately, the semiconductor industry has developed methods over the decades for handling large silicon wafers without breaking them. And when Si-IF–based systems are properly anchored and processed, we expect them to meet or exceed most reliability tests, including resistance to shock, thermal cycling, and environmental stresses.

There’s no getting around the fact that the material cost of crystalline silicon is higher than that of FR-4. Although there are many factors that contribute to cost, the cost per square millimeter of an 8-layer PCB can be about one-tenth that of a 4-layer Si-IF wafer. However, our analysis indicates that when you remove the cost of packaging and complex circuit-board construction and factor in the space savings of Si-IF, the difference in cost is negligible, and in many cases Si-IF comes out ahead. [READ MORE]