Heat Pumps Could Shrink the Carbon Footprint of Buildings 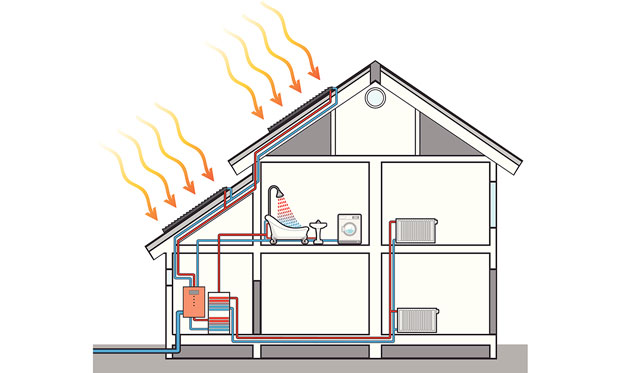 Buildings use more than one-third of the world’s energy, most of it for heating spaces and water. Most of this heat is generated by burning natural gas, oil, or propane. And where these fossil fuels are consumed, greenhouse gas emissions are a given.

Electric heat pumps, first widely used in the 1970s in Europe, could be the best solution to cut that fossil fuel use. They could slash the carbon emissions of buildings by half. And if powered by renewables, emissions could potentially go down to zero.

Cutting carbon emissions from heating and cooling will be critical to keep global average temperatures from rising by more than 1.5 degrees Celsius above preindustrial levels. Already, anthropogenic climate change has caused average global temperatures to rise by approximately 1 degree C, according to the Intergovernmental Panel on Climate Change. At the United Nations Climate Action Summit next week, in New York, world leaders will discuss concrete steps to meet climate targets.

Large heat pumps are starting to find use in industry—mainly food, chemical, paper, and wood factories—where they can recover waste heat. But less than 3 percent of heating needs in buildings are met with heat pumps, according to the International Energy Agency. That’s because it’s still cheaper to burn fossil fuels. But heat pumps are starting to gain traction as the technology matures and countries focus on tackling climate change by meeting emissions reduction targets.

Global heat-pump sales jumped 10 percent between 2017 and 2018. Energy policies in China, Japan, and Europe have created large, fast-growing markets. In the United States, California’s push for building electrification should boost heat-pump sales. This in turn is making manufacturers and installers pay attention.

“Things are moving in the right direction for heat-pump technology,” says Kashif Nawaz, of Oak Ridge National Laboratory. “There has been a lot of adoption and interest. And some challenges which can also be opportunities.”

A heat pump uses a compressor and refrigerant to move heat from one place to another. It can extract heat from outside air, even in the winter, and release it inside a house, basically like an air-conditioner running in reverse.

This design means they can also cool homes, but they are best suited for heating, Nawaz says. Compared with conventional resistive electric heaters and gas-fired furnaces, “they are the most efficient heating equipment for domestic heating.” They deliver three to four times as much heat for the same energy input.

Large heat pumps used in factories can make a huge dent in emissions. This spring, two Austrian companies installed heat pumps for drying starch and bricks, cutting energy use by up to 80 percent and carbon dioxide emissions by up to 90 percent compared with those of natural-gas heaters. A large factory that specializes in making French fries installed a heat pump to dry the potato fries before baking; it has reduced the amount of energy consumed in the drying process by 70 percent.

But infiltrating the residential market will be key for heat pumps to have a big climate change impact. Their market share for building heating needs to triple by 2030 to meet the IEA’s Sustainable Development Scenario goals.

“In general, the higher upfront cost has been the major obstacle,” Nawaz says. The systems’ relative complexity can add to equipment and installation costs. It is also still a relatively new technology in the United States, and risk-averse builders might shy away from it.

The lack of wide adoption in the United States might also stem from a lack of political interest, he adds. But some progress has been evident in the past year or two. In addition to California, states including New York, Washington, Maine, and Vermont have begun analyzing legislation and incentives to boost heat-pump adoption.

Meanwhile, the global heat-pump market is already being driven by governmental action. China sells 40 to 50 million units every year, making it the world’s largest market. This commercial activity has been spurred by government subsidies aimed at reducing air pollution. Similar clean energy policies and incentives in Europe have created a strong market there. In 2017, for instance, electric heat pumps overtook gas heating for residential buildings in Germany.

Another hurdle for heat pumps to overcome, says Nawaz, is their potential negative environmental impact. Conventional systems use hydrofluorocarbon gases that are an environmental hazard waiting to happen. Released into the air by a device that springs a leak, these gases can gobble up ozone or contribute to global warming because they are hundreds of times more potent than carbon dioxide. So the industry is keen to find alternate refrigerants.

Japan, which has historically led high-efficiency heat-pump development, is promoting a new heat-pump technology called EcoCute that uses carbon dioxide as the refrigerant. “It’s a higher-pressure system, so it costs more. But it is also compact and much more efficient,” Nawaz says.

Other refrigerants are also being employed in order to sidestep this issue. The aforementioned French fry factory, for instance, uses an ammonia heat pump. Some manufacturers are switching to propane as a refrigerant. Propane is flammable, but new heat-pump designs use minimal refrigerant and keep it distributed evenly. “I won’t be surprised if in the next few years there is a fully mature heat-pump market based on propane,” says Nawaz.

Another thing putting a chill on heat pumps’ adoption is the misconception that they don’t work well in very cold climates. That could’ve been true for older technology, but no longer. Though it’s true that frigid outside temperatures reduce their efficiency, heat pumps are still twice as efficient as electric resistance heaters or gas boilers. In fact, most of the heat pumps sold and installed in Europe are heating homes and businesses in the cold northern nations of Sweden, Finland, and Norway.

According to the IEA, heat pumps could supply 90 percent of the world’s space and water heating needs. The Rocky Mountain Institute, in a 2018 report, stated that the prices of heat pumps will fall as they catch on and manufacturers achieve economies of scale. That and other factors such as more renewable energy and carbon pricing could help speed up the shift to electric heating. In the end, getting to low-carbon heating will need climate-driven political and economic will. [READ MORE]