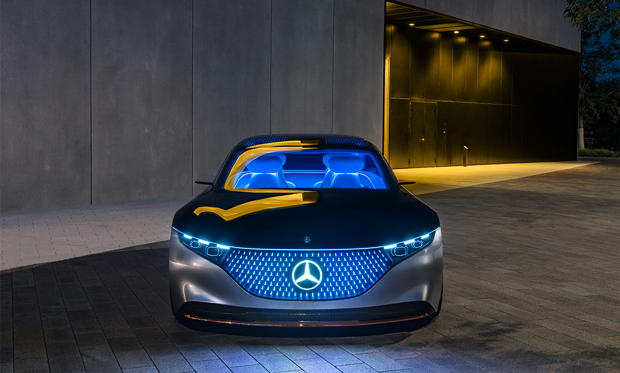 The Vision EQS appears to have the design, luxury, and driving range to match anything in the electric space

Mercedes-Benz has apparently seen the light on electric vehicles, including a vow to create an entirely carbon-neutral fleet of new cars by 2040. And EV fans will definitely see the light of its new Vision EQS, a concept sedan whose groundbreaking “Digital Light” headlamps are an integral part of its networked safety systems.

Mercedes unveiled the Vision EQS Tuesday at the Frankfurt Motor Show. It’s a dramatically styled sedan with an equally dramatic driving-range claim: Up to 700 kilometers (435 miles), based on lab testing under Europe’s new WLPT test cycle, which is designed to generate more-realistic estimates of real-world EV efficiency.

If Mercedes can speed a production version of the EQS to market, that 700 km would make it the marathon champ of current EV’s, topping the 595 km of the Tesla Model S and Model X Long Range versions. It would also be a significant, 250-km range advantage over the 2020 Porsche Taycan, which has posted a 450-km WLPT estimate. The EQS’s range would put it more than 350 km beyond the demands of stricter U.S. EPA measures.

A 350 kilowatt ultra-fast charging system, similar to the Porsche’s, allows an 80-percent charge in 20 minutes or less.

With roughly 100 kilowatt-hours of batteries packaged underfloor, and electric motors at both axles, the EQS can vary all-wheel-drive power between front or rear wheels. Mercedes pegs output at roughly 350 kW (469 horsepower), with 759 Newton-meters (560 pound-feet) of torque—good for a 0 to 100 km/h (0-60 mph) surge in less than 4.5 seconds.

The first all-electric Mercedes, the EQC crossover SUV, is already on sale in Europe, and arrives in America next year as a 2021 model. This Vision EQS, being an auto-show concept, is designed as both a showstopper and as an intriguing teaser for Mercedes’ latest designs and technology. The body previews the brand’s streamlined “One Bow” design language that will influence several upcoming models. Inside, a series of projection displays form an unbroken, floating sculpture for the dashboard that recalls the cockpit of a luxury yacht. Maple wood trim combines with sustainable materials, including microfiber made from recycled PET bottles; and a roof liner whose textile includes recycled plastic from ocean waste. [READ MORE]