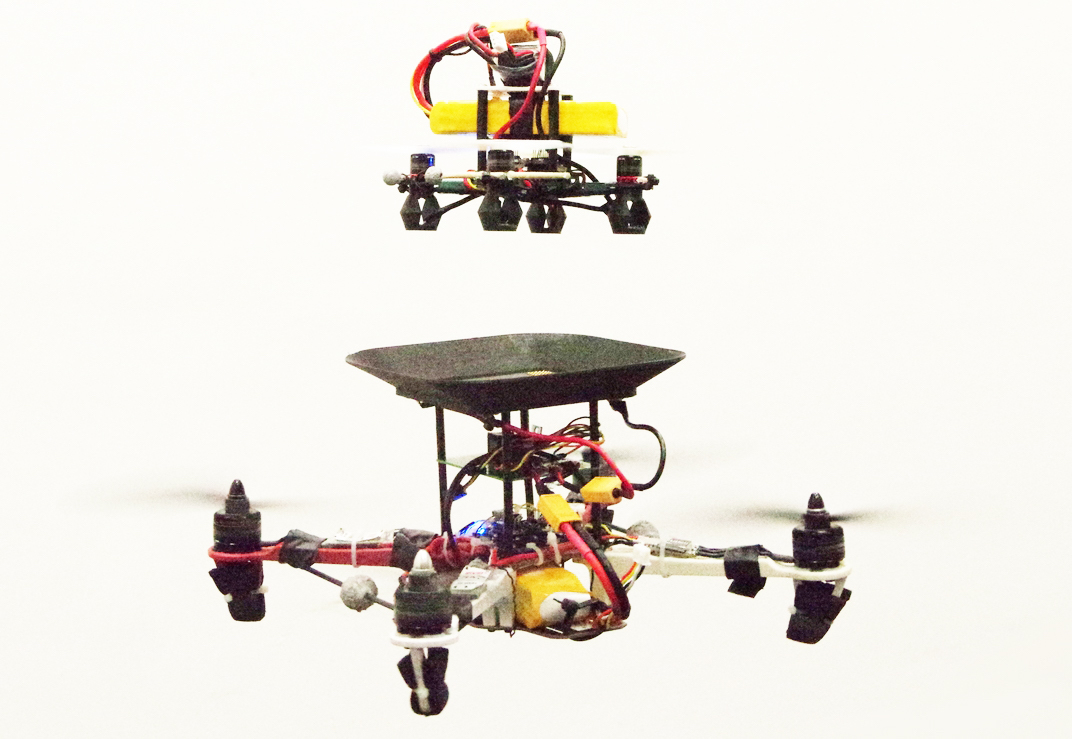 Battery power is a limiting factor for robots everywhere, but it’s particularly problematic for drones, which have to make an awkward tradeoff between the amount of battery they carry, the amount of other more useful stuff they carry, and how long they can spend in the air. Consumer drones seem to have settled around about a third of their overall mass in battery, resulting in flight times of 20 to 25 minutes at best, before you have to bring the drone back for a battery swap. And if whatever the drone was supposed to be doing depended on it staying in the air, then you’re pretty much out of luck.

When much larger aircraft have this problem, and in particular military aircraft which sometimes need to stay on-station for long periods of time, the solution is mid-air refueling—why send an aircraft all the way back to its fuel source when you can instead bring the fuel source to the aircraft? It’s easier to do this with liquid fuel than it is with batteries, of course, but researchers at UC Berkeley have come up with a clever solution: You just give the batteries wings. Or, in this case, rotors.

The big quadrotor, which weighs 820 grams, is carrying its own 2.2 Ah lithium-polymer battery that by itself gives it a flight time of about 12 minutes. Each little quadrotor weighs 320 g, including its own 0.8 Ah battery plus a 1.5 Ah battery as cargo. The little ones can’t keep themselves aloft for all that long, but that’s okay, because as flying batteries their only job is to go from ground to the big quadrotor and back again.

How the flying batteries work

All of this happens in a motion-capture environment, which is a big constraint, and getting this precision(ish) docking maneuver to work outside, or when the primary drone is moving, is something that the researchers would like to figure out. There are potential applications in situations where continuous monitoring by a drone is important—you could argue that switching off two identical drones might be a simpler way of achieving that, but it also requires two (presumably fancy) drones as opposed to just one plus a bunch of relatively simple and inexpensive flying batteries. [READ MORE]