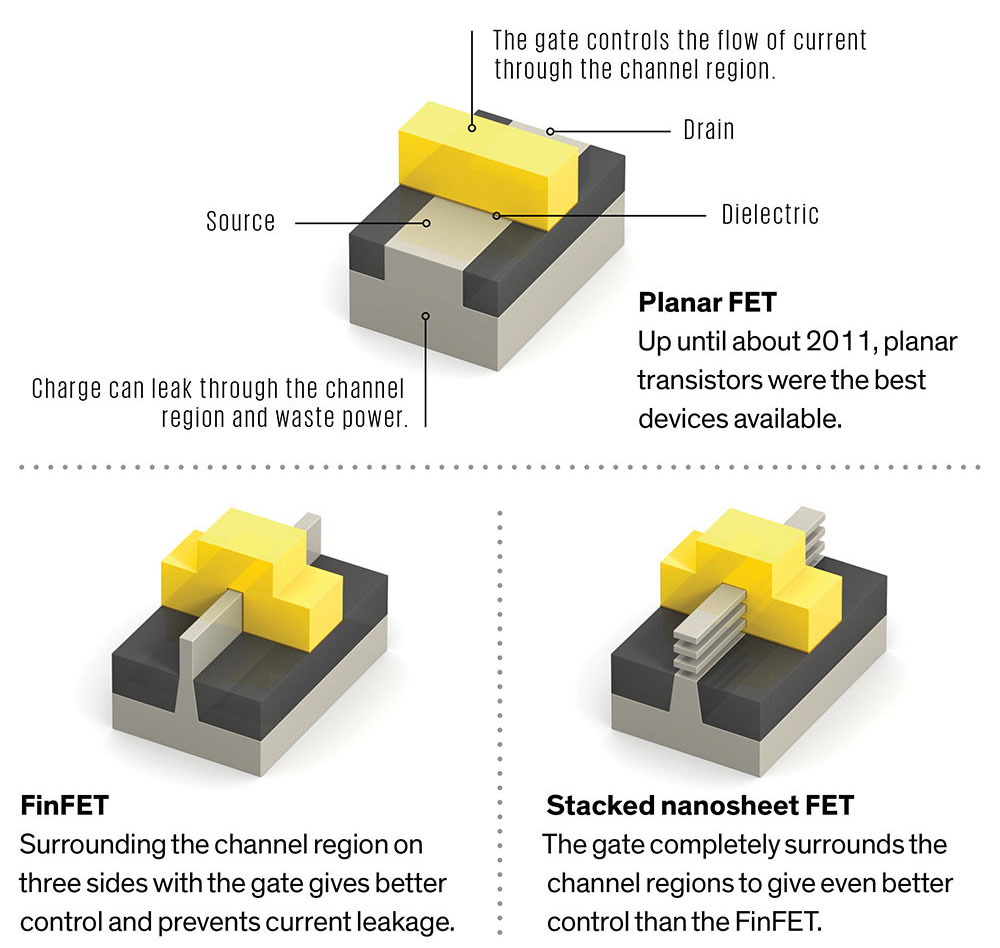 The modern microprocessor is among the world’s most complex systems, but at its heart is a very simple, and we think beautiful, device: the transistor. There are billions of them in a microprocessor today, and they are nearly all identical. So improving the performance and boosting the density of these transistors is the most straightforward way to make microprocessors—and the computers they power—work better.

That’s the premise behind Moore’s Law, even now that it’s (almost) at an end. You see, making smaller, better transistors for microprocessors is getting more and more difficult, not to mention fantastically expensive. Only Intel, Samsung, and Taiwan Semiconductor Manufacturing Co. (TSMC) are equipped to operate at this frontier of miniaturization. They are all manufacturing integrated circuits at the equivalent of what is called the 7-nanometer node. That name, a vestige of the early days of Moore’s Law, doesn’t have a clear physical meaning anymore, but it nevertheless reflects the degree to which features and devices on an integrated circuit are miniaturized.

Right now, 7 nm is the cutting edge, but Samsung and TSMC announced in April that they were beginning the move to the next node, 5 nm. Samsung had some additional news: It has decided that the kind of transistor the industry had been using for nearly a decade has run its course. For the following node, 3 nm, which should begin limited manufacture around 2020, it is working on a completely new design.

That transistor design goes by a variety of names—gate-all-around, multibridge channel, nanobeam—but in research circles we’ve been calling it the nanosheet. The name isn’t very important. What is important is that this design isn’t just the next transistor for logic chips; it might be the last. There will surely be variations on the theme, but from here on, it’s probably all about nanosheets.

Although the shape and the materials have changed, the metal oxide semiconductor field-effect transistor, or MOSFET—the kind of transistor used in microprocessors—has included the same basic structures since its invention in 1959: the gate stack, the channel region, the source electrode, and the drain electrode. In the device’s original form, the source, drain, and channel are basically regions of silicon that are doped with atoms of other elements to produce either a region with an abundance of mobile negative charge (n-type) or one with an abundance of mobile positive charges (p-type). You need both types of transistors for the CMOS technology that makes up today’s computer chips.

The MOSFET’s gate stack is situated just above the channel region. Today the gate stack is made of metal (for the gate electrode) atop a layer of dielectric material. The combination is designed to project an electric field into the transistor channel region while preventing charge from leaking through.

Applying a large enough voltage to the gate (relative to the source) creates a layer of mobile charge carriers near the interface between the dielectric and the silicon. Once this layer completely bridges the span from source to drain, current can flow across. Reducing gate voltage to near zero should squeeze that conductive pathway shut.

Of course, for current to flow through the channel from the source to the drain, you first need a voltage across it. As transistor structures were made smaller and smaller, the effects of this voltage ultimately led to the biggest shape-shift in transistor history.

That’s because the source-drain voltage can create its own conductive region between the electrodes. As the channel region became shorter and shorter with each new transistor generation, the influence of the drain voltage got bigger. Charge would leak across, ducking beneath the region near the gate. The result was a transistor that was never completely off, wasting power and generating heat.

To stanch the unwanted flow of charge, the channel region had to be made thinner, restricting the path for charge to sneak through. And the gate needed to surround the channel on more sides. Thus, today’s transistor, the FinFET, was born. It’s a design in which the channel region is essentially tilted up on its side to form a slim fin of silicon between the source and the drain, providing a wider path for current to flow through. The gate and dielectric are then draped over the fin, surrounding it on three sides instead of just one. [READ MORE]