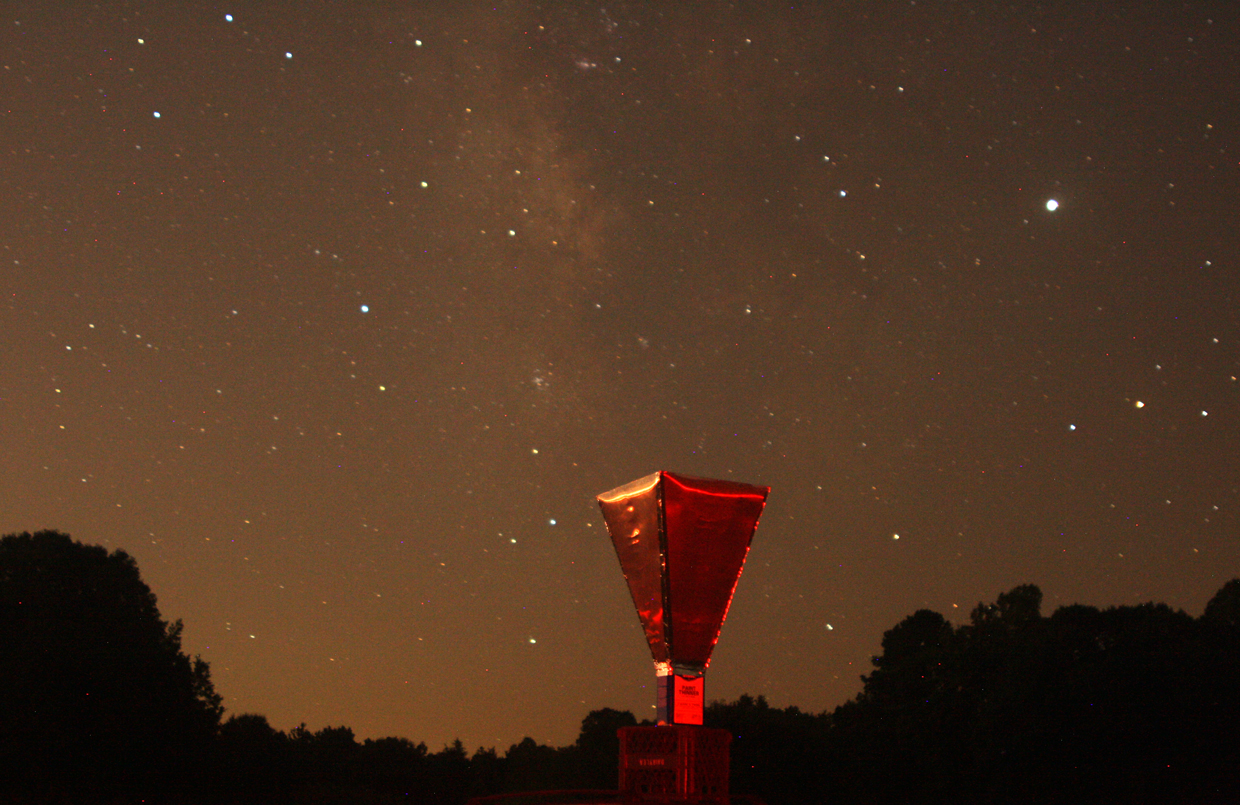 Detect galactic hydrogen using roof flashing, a paint-thinner can, and a software-defined radio

A young friend recently spent a week learning about radio astronomy at the Green Bank Observatory in West Virginia. His experience prompted me to ask: How big a radio antenna would you need to observe anything interesting? It turns out the answer is a half meter across. For less than US$150 I built one that size, and it can easily detect the motions of the spiral arms of the Milky Way galaxy. Wow!

My quest began with a used satellite-TV dish and a “cantenna” waveguide made from a coffee can placed at the dish’s focus. Unfortunately, I had to abandon this simple approach when I figured out that a coffee can was too small to work for the wavelength I was most interested in: 21 centimeters. That is the wavelength of neutral hydrogen emissions, a favorite of radio astronomers because it can be used to map the location and motion of clouds of interstellar gas, such as those in the spiral arms of our galaxy.

Some research revealed that amateur radio astronomers were having success with modest horn antennas. So I copied the example of many in an online group called Open Source Radio Telescopes and purchased some aluminized foam-board insulation as antenna construction material. But I was troubled when my multimeter showed no evidence that the aluminized surface could conduct electricity. To make sure the material would have the desired effect on radio waves, I built a small box out of this foam board and put my cellphone inside it. It should have been completely shielded, but my cellphone received calls just fine.

That experiment still perplexes me, because people definitely do build radio telescopes out of aluminized foam board. In any case, I abandoned the board and for $13 purchased a roll of 20-inch-wide (51-centimeter-wide) aluminum flashing—the thin sheet metal used to weatherproof tricky spots on roofs.

The width of my roll determined the aperture of my horn’s wide end. The roll was 10 feet (3 meters) long, which limited the length of the four sides to 75 cm. An online calculator showed that a horn of those dimensions would have a respectable directional gain of 17 decibels. Some hours with snips and aluminized HVAC tape ($8) resulted in a small horn antenna. Attaching a square of ordinary foam board (not the aluminized kind) to the open end made it plenty robust. [READ MORE]