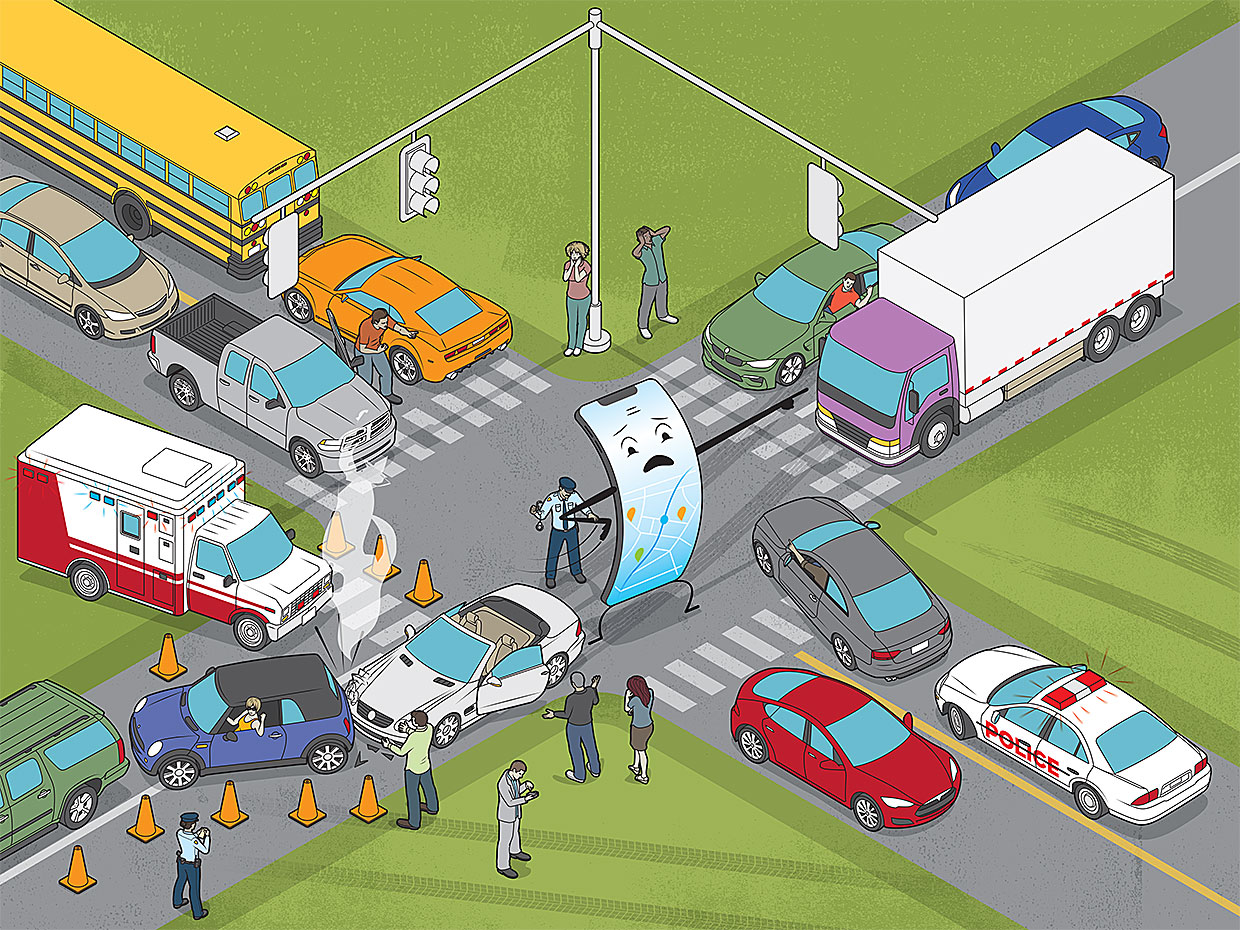 The proliferation of apps like Waze, Apple Maps, and Google Maps is causing chaos

Miguel Street is a winding, narrow route through the Glen Park neighborhood of San Francisco. Until a few years ago, only those living along the road traveled it, and they understood its challenges well. Now it’s packed with cars that use it as a shortcut from congested Mission Street to heavily traveled Market Street. Residents must struggle to get to their homes, and accidents are a daily occurrence.

The problem began when smartphone apps like Waze, Apple Maps, and Google Maps came into widespread use, offering drivers real-time routing around traffic tie-ups. An estimated 1 billion drivers worldwide use such apps.

Today, traffic jams are popping up unexpectedly in previously quiet neighborhoods around the country and the world. Along Adams Street, in the Boston neighborhood of Dorchester, residents complain of speeding vehicles at rush hour, many with drivers who stare down at their phones to determine their next maneuver. London shortcuts, once a secret of black-cab drivers, are now overrun with app users. Israel was one of the first to feel the pain because Waze was founded there; it quickly caused such havoc that a resident of the Herzliya Bet neighborhood sued the company.

The problem is getting worse. City planners around the world have predicted traffic on the basis of residential density, anticipating that a certain amount of real-time changes will be necessary in particular circumstances. To handle those changes, they have installed tools like stoplights and metering lights, embedded loop sensors, variable message signs, radio transmissions, and dial-in messaging systems. For particularly tricky situations—an obstruction, event, or emergency—city managers sometimes dispatch a human being to direct traffic.

But now online navigation apps are in charge, and they’re causing more problems than they solve. The apps are typically optimized to keep an individual driver’s travel time as short as possible; they don’t care whether the residential streets can absorb the traffic or whether motorists who show up in unexpected places may compromise safety. Figuring out just what these apps are doing and how to make them better coordinate with more traditional traffic-management systems is a big part of my research at the University of California, Berkeley, where I am director of the Smart Cities Research Center.

Here’s how the apps evolved. Typically, the base road maps used by the apps represent roads as five functional classes, from multilane freeways down to small residential streets. Each class is designed to accommodate a different number of vehicles moving through per hour at speeds that are adjusted for local conditions. The navigation systems—­originally available as dedicated gadgets or built into car dashboards and now in most smartphones—have long used this information in their routing algorithms to calculate likely travel time and to select the best route.

Initially, the navigation apps used these maps to search through all the possible routes to a destination. Although that worked well when users were sitting in their driveways, getting ready to set out on a trip, those searches were too computationally intensive to be useful for drivers already on the road. So software developers created algorithms that identify just a few routes, estimate the travel times of each, and select the best one. This approach might miss the fastest route, but it generally worked pretty well. Users could tune these algorithms to prefer certain types of roads over ­others—for example, to prefer highways or to avoid them.

The digital mapping industry is a small one. Navteq (now Here Technologies) and TomTom, two of the earliest digital-map makers, got started about 30 years ago. They focused mainly on building the data sets, typically releasing updated maps quarterly. In between these releases, the maps and the routes suggested by the navigation apps didn’t change.

When navigation capabilities moved to apps on smartphones, the navigation system providers began collecting travel speeds and locations from all the users who were willing to let the app share their information. Originally, the system providers used these GPS traces as historical data in algorithms designed to estimate realistic speeds on the roads at different times of day. They integrated these estimates with the maps, identifying red, yellow, and green routes—where red meant likely congestion and green meant unrestricted flow.

As the historical records of these GPS traces grew and the coverage and bandwidth of the cellular networks improved, developers started providing traffic information to users in nearly real time. Estimates were quite accurate for the more popular apps, which had the most drivers in a particular region.

And then, around 2013, Here Technologies, TomTom, Waze, and Google went beyond just flagging traffic jams ahead. They began offering real-time rerouting suggestions, considering current traffic on top of the characteristics of the road network. That gave their users opportunities to get around traffic slowdowns, and that’s how the chaos began. [READ MORE]